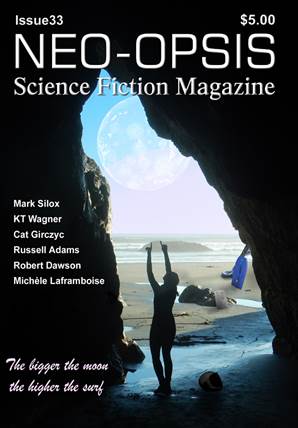 The thirtieth-third issue of Neo-opsis Science Fiction Magazine is available digitally as a PDF or ePub. Click here to buy your copy of this issue!

The cover of issue 31 is Surf, by Karl Stephanie Johanson.

In this issue’s editorial Karl talks about Science and Questioning.

Karl Johanson’s A Walk Through the Periodic Chart is about Carbon and Potassium. Illustrations by Karl and Stephanie Ann Johanson.

Letters to the Magazine this issue are from: Jeffrey Scott, Kevin Wright and Adrian Peterson.

The first story in issue thirty-two is Robert Dawson’s “Hands on the Wheel.” Robert has had work published in Nature Futures, Compelling SF, and many other periodicals and anthologies. His story "The Flight of the Osprey" was published in issue 26 of Neo-opsis.

The second story is Mark Silcox’s “Breaking Camouflage.” Mark was born just outside of Toronto, Canada. He has at various times worked as a security guard, a short order cook, and a freelance writer in the video game industry.  He currently lives in Edmond, OK, where he teaches philosophy at The University of Central Oklahoma. He has published several book-length works of philosophy and over a dozen science fiction and horror stories in a wide variety of venues. His SF novel The Face on the Mountain was published by Incandescent Phoenix Press in 2015.

The third story is Russ Adams’ “The Sea Child.” Russ has been writing all his life in various forms, mainly short stories and novels but there are a few plays as well. The impulse to create stories originated at twelve when, at his grandmother's funeral, he encountered his first SF magazine. It was love at first sight.

The fourth story is KT Wagner’s “Yellow is the Colour of the End of the World.” KT writes speculative fiction in the garden of her home in the Lower Mainland of British Columbia. She enjoys day-dreaming and is a collector of strange plants, weird trivia and obscure tomes. KT’s short stories are published in magazines and anthologies. www.northernlightsgothic.com and @KT_Wagner

The fifth story is, Cat Girczyc’s “The New Tudors.” Cat has a number of writing credits, including stories and poems, plays, and TV scripts. For TV, she’s written for shows from The Collector to Cybersix to True Pulp Murder. Currently, Cat works as a technical communications manager and pursues creative writing by night. She won two Prix Aurora awards in the 1990s, plus her poem "Card" was a 2017 Aurora nominee. In addition, she’s received multiple Writers of the Future Honorable Mentions, including for this story. Cat enjoys the fellowship of other SFF writers in the APEX writing group mentored by David Farland. Shakespeare was her specialty in her Honours English B.A. plus she is a mother. These two influences came together to create “The New Tudors”. www.catscreenwriting.com

The sixth story is Karl Johanson’s “The Test.” Most people can relate to a story featuring an unreasonable teacher.

The Seventh story is Michèle Laframboise’s “Essential Maintenance.” Michèle has been fascinated by sciences and nature since she could walk. She studied in geography and engineering, but two recessions and her own social awkwardness kept the plush desk jobs away. Instead, she did a string of odd jobs to sustain her budding family: some quite dangerous, others quite tedious, all of them sources of inspiration. With words or drawings, Michèle create worlds filled with humor, invention and wonder. She got a lot of novels and graphic novels out, but publishing houses tended to flop behind her like those rope bridges in adventure movies… So she ran faster forward. Michèle now has about 20 novels out and over 60 short stories in French and English, earning various distinctions in Canada and Europe. You can stop by at her website (michele-laframboise.com) to say hello, or visit her indie publishing house (echofictions.com) to get a taste of her fiction!

The Last Two Pages is “Wrecking Stuff in Science Fiction and Advice I gave One of my Nieces” by Karl Johanson. 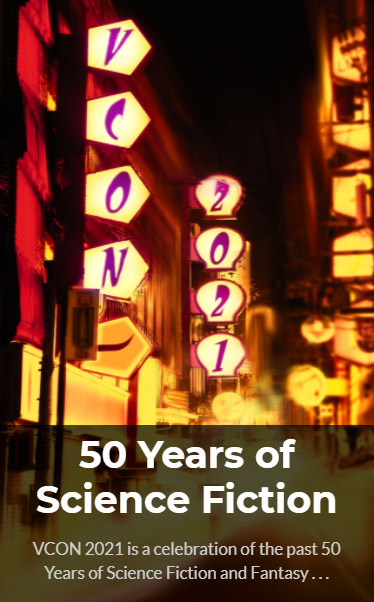 A science fiction/fantasy novel by six-time Aurora Award winning writer/editor Karl Johanson.A game designer dies and finds himself in the afterlife. He's not sure if it's Hell, Heaven, Valhalla, or wherever. One thing is for sure though, things in the afterlife become much more interesting as advanced game designers die and show up there. http://www.neo-opsis.ca/BuyGameDesignerDigital.htm