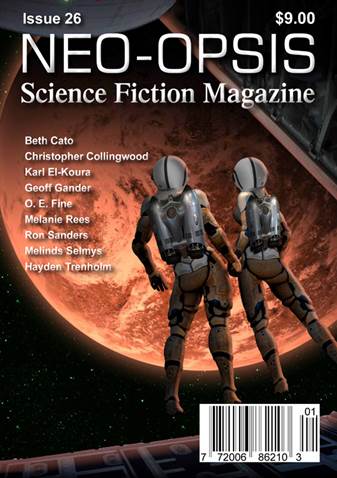 The twenty-sixth issue of Neo-opsis Science Fiction Magazine is 8” by 5 ½”, 80 pages.

The cover of issue 26 is First Jump, by Ron Saunders. Ron is an L.A.-based author, poet, and illustrator working across the board. His works tend to lean heavily on the human condition, generally with a cynical edge, and with a high sense of drama. He feels self-promotion is nothing more than compensation, and hopes his works can stand or fall on their own merit. To that end, there’s plenty to read and ponder on his website at http://ronsandersatwork.com.

Karl’s editorial is Bring Back Your Dead, which is a discussion on various ways characters are killed and brought back to life in stories.

Karl Johanson’s A Walk Through the Periodic Chart is about the element Hafnium this issue. There are brief asides about other elements in the news. Illustration by Stephanie Ann Johanson.

The first story in issue twenty-six is In Memoriam, by Melinda Selmys. Melinda is a Canadian writer.

The first poem in issue 26 is Warning, Flashing in Red Overlaid On Your Visor by Beth Cato. Beth is an active member of the Science Fiction & Fantasy Writers of America. Her poetry has appeared in The Christian Science Monitor, Star*Line, and The Pedestal Magazine.

The second story is For Old Times’ Sake by Geoff Gander. Geoff is a Canadian writer of horror, science fiction - occasionally of a darkly humorous bent - and roleplaying games.

The fourth story is You Just Proved Title Advertising Works by Karl ElKoura. Karl has had stories appear in Daily Science Fiction, AE: The Canadian Science Fiction Review, and the Triangulation anthology “Lost Voices.” His story “The Kedari Virus” was published in Issue 9 of Neo-opsis.

The fifth story is Timely Drop by Melanie Rees. Melanie is is an Australian writer. Her work has appeared in markets such as Apex, Cosmos online, Aurealis and Daily Science Fiction.

The Sixth story is The Scourge of Humanity by Hayden Trenholm. Hayden has had over 25 short story sales over the years, including to Neo-opsis, On Spec, PerihelionSF among others. He’s won the Aurora Award twice for short fiction. He is currently managing editor of Bundoran Press. Illustration by Karl Johanson.

The Second poem is The Blood High by Christopher Collingwood. Christopher is an Australian poet.

The Third poem is The Sound of a Rasp on Stone, by Karl Johanson. Accompanying the poem are some photos of soap stone carvings by Stephanie Ann Johanson.

The Fourth poem is Touching (Soapstone) by Stephanie Ann Johanson. Accompanying the poem are some photos of a raw piece of soapstone transitioning to a completed carving.

Awards news includes listings for the Sunburst Awards, the Hugo Awards, the Nebula Awards and the Aurora Awards.

The Last Page is the article Keeping Your Timelines Straight, by Karl and Stephanie Johanson. This is an article about some of the ways that time travel is dealt with in fiction. 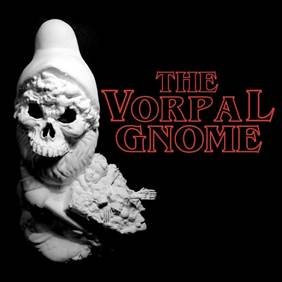 The Vorpal Gnome is a small shop that specializes in both old and new tabletop role-playing games (like Dungeons & Dragons, Pathfinder, Shadowrun, World of Darkness, etc), miniatures, dice, board games, fantasy novels, and more! The Gnome is chock full of nerd treasures-- come check it out.