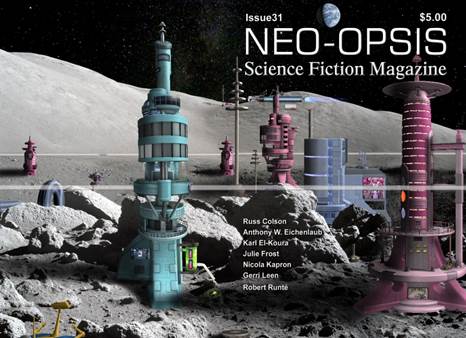 The thirtieth-first issue of Neo-opsis Science Fiction Magazine is available digitally as a PDF or ePub. Click here to buy your copy of this issue!

The cover of issue 31 is Lunar City, by Karl Johanson.

This issue’s editorial, by Karl and Stephanie, about Neo-opsis moving to a digital only format.

Karl Johanson’s A Walk Through the Periodic Chart is about Molybdenum, with asides about Carbon 14 batteries and production of Plutonium 238. Illustration by Stephanie Ann Johanson.

The first story in issue thirty is “The Last Farewell,” by Nicola Kapron. Nicola is in her 5th year of Digital Media Studies and Creative Writing at Vancouver Island University. She has previously been published in Portal Magazine, Rebel Mountain Press’s upcoming anthology Disabled Voices, and Mannison Press's anthology Little Girl Lost: Thirteen Tales of Youth Disrupted. She lives in Nanaimo, British Columbia, with a hoard of books—mostly fantasy and horror—and an extremely fluffy cat.

The poem “Heart of a Champion” is by Gerri Leen. Gerri  lives in Northern Virginia and originally hails from Seattle. You can find her poems in such places as: Eye to the Telescope, Star*Line, Dreams & Nightmares, Eternal Haunted Summer, and others. She also writes fiction in many genres, primarily fantasy—both light and dark, and often centered around mythology—and science fiction. Visit http://www.gerrileen.com to see what else she's been up to.

The second story is “Pulls Weeds and Does Dishes” by Anthony W. Eichenlaub. Anthony has had short stories published in Little Blue Marble, the anthology Fell Beasts and Fair, and A Punk Rock Future. He is a member of SFWA and a local writing group called the Rochester Writers Group. In his free time he enjoys photography, woodworking, and landscaping. His day job working on Watson Health at IBM, which keeps him up to date in AI and medical technology. His web site is https://anthonyeichenlaub.com. Twitter: @AWEichenlaub.

The third story is “Rite of Passage,” by Julie Frost. Julie writes every shade of speculative fiction and lives in Utah with her family--which consists of five guinea pigs, three humans, a tripod calico cat, and a kitten who thinks she's a warrior princess--and a collection of anteaters and Oaxacan carvings, some of which intersect. Her short fiction has appeared in Writers of the Future, The District of Wonders, Cosmos, Unlikely Story, Plasma Frequency, Stupefying Stories, and many other venues. Her first novel, Pack Dynamics, was released in 2015 by WordFire Press. She whines about writing, a lot, at: http://agilebrit.livejournal.com/ Illustration by Stephanie Ann Johanson.

The fourth story is “The Fossil Beds of Asgard,” by Russ Colson. Russ has published two stories previously in Neo-opsis (“And the Rocks Cried Out” in issue 23 and “The Antidote” in issue 17) as well as stories in Interzone, Stupefying Stories, and others. His SF novel, The Arasmith Certainty Principle, was published by Double Dragon Publishing.

The fifth story is “Detour on the Eightfold Path,” by Robert Runté. Robert edits speculative fiction at www.SFeditor.ca. Robert is a long-time reviewer, critic, and promoter of Canadian speculative fiction, including regularly reviewing for Neo-opsis. He is the winner of three Aurora Awards for literary criticism, including over 70 published reviews; the SF&F entry in the Encyclopedia of Canadian Literature; and innumerable conference presentations and workshops.

The Sixth story is “Stevenson’s Planet” Karl El-Koura. Karl resides in Canada’s capital city with his beautiful editor-wife and their adorable tiny human. Almost seventy of Karl’s short stories and articles have been published in magazines since 1998. In 2012 he independently published his debut novel Father John VS the Zombies, and in 2015 he published the sequel, Bishop John VS the Antichrist. www.ootersplace.com

Reviews this issue are of Upcycled Technology: Clever Projects You Can Do with Your Discarded Tech, by Daniel Davis (Reviewed by E. B. Klassen), the convention When Words Collide (reviewed by Dr. Robert Runté), and new characters in Star Trek Discovery (reviewed by Karl Johanson).

Awards news includes a listing for the Aurora Awards, the Sunburst Awards, and the Hugo Awards.

The Last Page is the article “Why Write,” by Stephanie Ann Johanson. Stephanie discusses reasons to write in addition to being a reader/viewer.