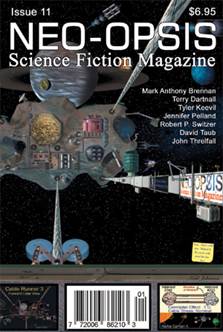 Karl Johanson’s A Walk Through The Periodic Chart deals with Gold, (Cartoon by Karen Lightbody) and includes Plutonium in the news and Uranium in the news.

The first story in issue eleven is “Silence in Screamland,” by Robert P. Switzer (4,673 words – short story). Robert is a Canadian writer from Ontario. He recently sold two stories to Tales of the Unanticipated.

The second story is “Justice,” by David Taub (4,673 words – short story). (Illustration by Stephanie Johanson) David lives in Sweden with his wife and son. His first horror novel, Comes the Dark, was published in 2006, and his short stories have appeared in Cosmos, Farthing, Dark Recesses Press, Nocturnal Ooze, Beyond Centauri, Mitrania (Swedish), and 9 Magazine (Greek).

The third story is “The Depths of Heaven,” by Mark Anthony Brennan (4,200 words – short story). (Illustration by Stephanie Johanson) Mark is a speculative fiction writer living in Victoria, BC, Canada. His fiction has appeared in such magazines as Dark Wisdom, On Spec, Descant, Here & Now, Andromeda Spaceways In-flight Magazine, and Tales of the Talisman, among many others. His stories have also been featured in several anthologies, including Open Space: New Canadian Fantastic Fiction, Bondage, Monsters Ink, and In the Outposts of Beyond. A collection of his short stories, Shelter from the Storm, was published in 2005.

The fourth story is “Wedding Day,” by Jennifer Pelland (4,533 words – short story). (Illustration by Stephanie Johanson) Jennifer has had fiction appear in publications such as Strange Horizons, Abyss and Apex, Tales of the Unanticipated, and Apex Digest, among others.

The fifth story is “Symposia,” by Tyler Keevil (4,800 words – short story). (Illustration by Stephanie Johanson) Tyler is a writing graduate from the University of British Columbia. Recently he was fortunate enough to receive a ‘Writer of the Year’ Award from Writers Inc. of London. He also took first prize in December’s Dark Tales Competition with his story, Ghosts of La Joya. He has been published in Lust for Life Anthology, Cambrensis and Pencambria.

The sixth story is “Thou Shalt Not Covet Thy Neighbour’s Arthropod,” by Terry Dartnall (1,381 words – short story). Terry teaches Artificial Intelligence at Griffith University, Brisbane, Australia. His speculative fiction has appeared in Agog, Ideomancer, Oceans of the Mind, Aphelion, Neverary and elsewhere. Trantor Publications published his short story collection, The Ladder at the Bottom of the World, as an ebook in 2006.

John Threlfall reports on the novel Double Star, “Even death can’t keep a great science fiction writer like Robert Heinlein down—especially when he’s now got Spider Robinson as a collaborator.”

The Last Three Pages is an article about Sky Hooks and space elevators.