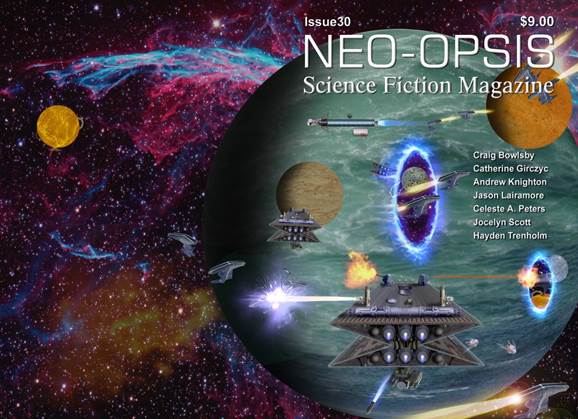 The thirtieth issue of Neo-opsis Science Fiction Magazine is 8” by 5 ½”, 80 pages. Click here to buy your copy of this issue!

The cover of issue 30 is Portals, by Karl Johanson.

Karl’s editorial is “The Importance of Science Fiction.” This is a transcript of part of a talk he gave at a launch of the Arca-45672 Audio Drama Podcast, which is written and produced by Claire Scherzinger. A video of the talk is at: https://www.youtube.com/watch?v=gUNLU60_feo

Karl Johanson’s A Walk Through the Periodic Chart is about Super Heroes Named After Elements. Illustration by Stephanie Ann Johanson. There’s also an aside about a new high temperature superconductor.

The first story in issue thirty is “Scrapheap Destiny,” by Andrew Knighton. Andrew has had over fifty stories published in magazines and anthologies such as Daily Science Fiction, Wily Writers, and Steampunk Reloaded.

The second story is “The Ninth Iteration” by Celeste A. Peters. Celeste has authored six published non-fiction books and penned a growing list of published short stories. In 2017 she also garnered a Prix Aurora Award nomination as managing editor of the Enigma Front: Burnt anthology. Celeste resides in Calgary, Alberta, where she enjoys the friendship and support of fellow writers in the Imaginative Fiction Writers Association. www.celestepeters.com.

The third story is “Victory by Water,” by Jocelyn Scott. Jocelyn lives in Toronto, where she is an anomaly: a seventh-generation Canadian. She has lived in various communities in southern Ontario, everything from villages without even one stoplight to the multicultural megalopolis of Toronto. She has an Honours B.A. in English with History Minor from the University of Toronto, and an M.A. in English from the same university. Her travels in Canada include Quebec, BC, and the Yukon; she has travelled frequently in the eastern United States, and has visited the United Kingdom, France, Italy, Greece and Turkey. She reads constantly in a variety of genres, most notably fantasy and history. She is married with an adult son and daughter, and a little white dog.

The fourth story is “Big Bad Ships from Outer Space,” by Jason Lairamore. Jason is a writer of science fiction, fantasy, and horror who lives in Oklahoma with his beautiful wife and their three monstrously marvelous children. He is a published finalist of the 2012 SQ Mag annual contest, the winner of the 2013 Planetary Stories flash fiction contest, a third place winner of the 2015 SQ Mag contest, and a recent Semi-Finalist in the Writers of the Future. His work is featured in over 65 publications, including Perihelion, Stupefying Stories and Third Flatiron. www.facebook.com/jason.lairamore

The fifth story is “Modiglaini Paints the World,” by Hayden Trenholm. Illustration by Stephanie Ann Johanson. Hayden has had over 25 short story sales over the years, including to Neo-opsis, On Spec, Perihelion SF among others. He’s won the Aurora Award twice for short fiction. He is currently managing editor of Bundoran Press.

The sixth story is “One Day in Tom’s Life, with Ice Cream,” by Craig Bowlsby. Craig’s science fiction work includes writing for and staring in the video series Commander’s Log. Craig wrote the play The Hound of London, and was the winner of the 2014 Brian McFarlane Award for outstanding research and writing by the Society for International Hockey Research.

Reviews this issue are of Beyond: Stories Beyond Time, Technology, and the Stars (reviewed by Dr. Robert Runté), and Star Trek Discovery, episode “Project Daedelus” (reviewed by John W. Herbert).

Awards news includes a listing for the Aurora Awards, and notes of the passing of Dave Duncan and Vonda N. McIntire.

The Last Three Pages is the article “Somehow They Forgot They had Transporters,” by Karl Johanson. In the movie Galaxy Quest, Ensign Guy at one point asks the other actors/characters, “Didn’t you guys ever watch the show?” In this article Karl essentially asks this of the writers of Star Trek Discovery, who seem to forget important aspects of the Star Trek, such as that they have Transporters.