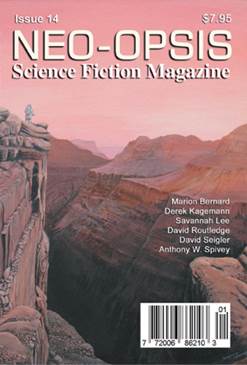 Stephanie Johanson’s painting, Mars, was used for the cover of issue 14.

Karl Johanson’s editorial this issue is Sometimes Less is More, a thoughtful look at reediting in movies for television, video, and DVDs.

Letters to the Magazine this issue are from: Carlos Hernandez (author of Cingulate Gyrus, Neo-opsis # 9), Mary Choo, Lynda Williams (author of books in The Okal Rey Saga), Nina Munteanu (author of Virtually Yours, Neo-opsis # 3, and Darwin’s Paradox), Lee Sheldon, C.S. Johnson (author of In Search of a Loophole, Neo-opsis # 12), Yvonne Pronovost (author of All the Tea in China, Neo-opsis # 7), Chris Ward (4000th submission prize winner), Kathy Peddlesden. Also in this section we have a write-up about a Snowed in Tardis.

This issue, Karl Johanson’s A Walk Through The Periodic Chart deals with Chromium. Following this is an article about Copper Tubing and the Lenz Effect.

The first story in issue fourteen is Seek You (4,087 words), by David Routledge. (Illustration by Stephanie Johanson) David has been reading science fiction since he was ten. He grew up to be a radio astronomer, insofar as he grew up. His astronomical interests include both phenomena in the interstellar medium and advances in radio telescopes. He has - as far as he knows - published science fiction only once before. He lives in Edmonton with his very understanding wife.

The second story is Kinship (3,439 words), by Savannah Lee. (Illustration by Stephanie Johanson) Savannah’s fiction can be found in the Blue Earth Review, Aoife’s Kiss, and Clean Sheets, where her story “Objects of Meaning” has been nominated for an anthology. She blogs at www.savannahspage.com.

The third story is Minion Like Me (5,981 words), by Derek Kagemann. (Illustrations by Karl Johanson) Derek has been many things: a musician, antique dealer, movie extra, and a cowboy at a Wild West town. He is finally pursuing a career as a freelance writer, while helping his wife to raise their son and manage their Indiana-based pet supply business. He has been published in Thieves Jargon and Knights of the Dinner Table.

The fourth story is Protocol (2,273 words), by Anthony W. Spivey. (Illustration by Karl Johanson) Anthony was born and raised in Butcherknife, Virginia - deep in the Appalachian Mountains. Trained as a software engineer, he regularly moves from coast to coast with his long suffering wife, Laurie, and their daughter, Saralain. Mr. Spivey’s horror and science fiction pieces have been published in Theatre of Decay, Nocturnal Ooze, Wanderings, Bewildering Stories, Aoife’s Kiss, and, most recently, in Neo-opsis. He welcomes any and all comments via email at aspivey3@nc.rr.com.

The fifth story is Enduring Childhood (1,500 words), by Marion Bernard. Marion lives on the far western edge of Canada. She has a couple of degrees that have nothing whatsoever to do with creative writing and a day job that keeps her supplied with paper and ink. Juggling work, multiple writing projects and a high energy child leaves little time for other passions. However, she does manage to squeeze in time to read, ski and dance.

The sixth story is Shedding Skin (5,864 words), by David Seigler. (Illustration by Stephanie Johanson) David grew up on the Texas plains where he met a few rattlesnakes, but no extraterrestrials. After living in California, he returned to Texas where he now lives with his family, sells comic books for a living and writes short fiction on the side. He’s otherwise quite stable.

Article: A Step in a Dream includes photos of Jeanne and Spider Robinson (writers of the novel Stardance), James Sposto (producer), and Kathleen McDonagh (dancer) during their trip to ride on Zero-Gravity Corporation’s modified 727, for a taste of free fall. (Photos were supplied by Jeanne Robinson.)

Karl Johanson devotes The Last Three Pages to Prognostication. Karl writes about the art of predictions and how people interpret them.