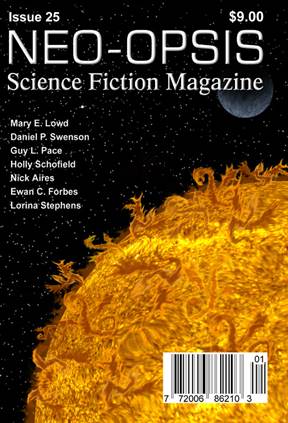 The twenty-fifth issue of Neo-opsis Science Fiction Magazine is 8” by 5 ½”, 80 pages.

The cover of issue 25 is a collaboration by Karl and Stephanie Johanson, Sun-Dragons.

Karl’s editorial is a brief commentary on the notion that the pen is mightier than the sword.

Karl Johanson’s A Walk Through the Periodic Chart is about the element Bismuth this issue. There are two brief asides about Sodium and Tritium. Illustration by Stephanie Ann Johanson.

The first story in issue twenty-five is Panda-Mensional by Mary E. Lowd. Mary is a science-fiction and furry writer in the Pacific Northwest. She’s had more than forty short stories published, as well as two novels — Otters In Space and Otters In Space 2: Jupiter, Deadly. Her fiction has been nominated thirteen times for the Ursa Major Awards and won a Cóyotl Award. She’s a member of SFWA, the Furry Writers’ Guild, a judge for the Cat Writers’ Association, and co-chair of the Wordos. She lives with her husband, daughter, son, four cats, and three dogs. For more information, visit www.marylowd.com.

The second story is Space Tagger by Daniel P. Swenson. Daniel lives in Chino Hills, California with his wife, two children and two furry aliens with claws and whiskers. He has also been published in Lore. He does most of his writing on the train or in other in-between moments.

The third story is New Kid by Guy L. Pace. Guy is a retired information security professional who is now working on novels for young adults, short stories in science fiction and other projects. Guy’s science fiction projects generally center on a universe concept he calls The Expansion. In this concept, humanity leap-frogs out from the solar system to habitable planets circling nearby stars, then further out.

The fourth story is Landing Day by Holly Schofield. Holly has been published in Tesseracts 17, AE: The Canadian Science Fiction Review, Perihelion, The Future Embodied, and Crossed Genre’s Oomph. She has work forthcoming in several publications, including Lightspeed Magazine. She travels through time at the rate of one second per second, oscillating between the alternate realities of a prairie farmhouse and her writing cabin on the west coast.

The fifth story is License to Live by Nick Aires. Nick is the author of Arrow: Heroes and Villains and the interactive novel app Diabolical. His short stories have appeared in various places, most recently JukePop Serials and Voices of Imagination 2. Nick lives and writes near beautiful Vancouver, BC, and at this moment he is probably thinking about aliens or dragons... or alien dragons flying spaceships through magical portals. Illustration by Stephanie Ann Johanson.

The Seventh Story is When Every Song Reminds You of a Dead Universe, by Karl Johanson. You’ve seen his non-fiction throughout 25 issues of Neo-opsis, now’s a good chance to check out his fiction. Originally published in Perihelion Science Fiction.

The final story is Occupational Hazards by Lorina Stephens. Lorina has worked as editor, freelance journalist for national and regional print media, is author of seven books both fiction and non-fiction, been a festival organizer, publicist, lectures on many topics from historical textiles and domestic technologies, to publishing and writing, teaches, and continues to work as a writer, artist, and publisher at Five Rivers Publishing. She has had several short fiction pieces published in Canada’s acclaimed On Spec magazine, Postscripts to Darkness, and Marion Zimmer Bradley’s fantasy anthology Sword & Sorceress X.

Reviews this issue are of the book Modern Sci-Fi Films FAQ by Tom Demichael, the movie Interstellar, the computer game GemCraft Labrynth by gameinabottle.com, the movie Jupiter Ascending by Warner Brothers, and the 1988 movie They Live by Universal Pictures.

The Last Nine Pages is an article about Disturbing Episodes of Star Trek. This includes examples from Classic Trek, Star Trek: The Next Generation, Star Trek Deep Space Nine, Star Trek Voyager, Enterprise, as well as from the Rebooted Star Trek movies.

See a review of this issue at