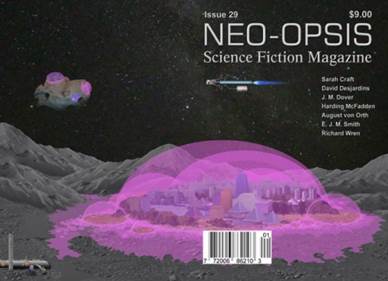 The twenty-ninth issue of Neo-opsis Science Fiction Magazine is 8” by 5 ½”, 80 pages.

The cover of issue 29 is Bubblegum Colony, by Stephanie and Karl Johanson.

Karl’s editorial is Fine Tuning. He talks about gravity waves.

Karl Johanson’s A Walk Through the Periodic Chart is about Cobalt weapons in the movies. Illustration by Stephanie Ann Johanson.

The first story in issue twenty-nine is Myathan Rainbows, by Sarah Craft. When it comes to chaos, Sarah wears the crown--although a bit lopsided. As a freelancer, she spends much of her day herding authors and publishers working as a publicist, editor, and personal assistant. In between emails, spell checks and chasing metaphorical rabbits, she creates wearable art with beads, thread and anything shiny. To keep empty nest syndrome at bay, she also games, entertains cats and enjoys watching 90’s TV series with her husband. You can find her work in "Hero of Ithtar" in Women in Practical Armor anthology by Evil Girlfriend Media, and "The Coin Whisperer" in The Best of Abyss & Apex Volume II. (I accidentally spelled Sarah Craft as Sarah Croft on the print cover. My apologies for the error. Karl Johanson)

The second story is Dragon Creed by J. M. Dover, who is a writer of fantasy fiction. She has studied fiction writing at the Alexandra Writers’ Centre, is a member of IFWA, and has attended the convention When Words Collide several times. Illustration by Stephanie Ann Johanson.

The third story is King of the Belt by Richard Wren. Richard has been writing short stories for the last twenty years, interspersed with teaching science (literally everything from Astronomy to Zoology) and running an environmental field centre. In recent years he has had stories published in Perihelion SF, Nebula Rift and Syzygy magazines. Illustration by Karl Johanson

The fourth story is A Matter of Nurture by August von Orth, who has has had their story “The Road Less Taken” published in Sci Phi Journal. By day, he is a nuclear physicist experienced in the field of nuclear anti-terrorism, who has published dozens of research papers in the scientific literature. Illustration by Stephanie Ann Johanson.

The fifth story is Project Victoria by E. J. M. Smith, who is a Canadian writer who has loved writing for years.

The sixth story is Tammy Tock and the Turnkey Monkey Man by Harding McFadden. Harding has been published in the anthologies Challenger Unbound, Dragon's Hoard, The Idolaters of Cthulhu, and An Improbable Truth: The Paranormal Adventures of Sherlock Holmes, as well as in the August 2015 issue of Mystic Signals and the first issue of Cyclopean Magazine.

The seventh story is Dragon by David Desjardins. David is a graduate of the University of Ottawa. He has worked as a clerk for the Bank of Canada, a reporter for two local community newspapers, and a stay-at-home dad. He recently been published by The Northern Cardinal Review.

Reviews this issue are of Valarian and the City of a Thousand Planets, Star Trek: Discovery, and Tomb Raiders 2018.

Awards news includes a listing for the Aurora Awards.

The Last Three Pages is the article The Orville: Is it a Parody?, by Karl Johanson. In this article Karl dives into what kind of show The Orville is.

Click here to buy your copy of this issue. 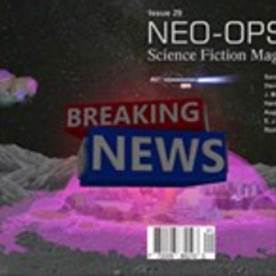 An animated version of the cover.