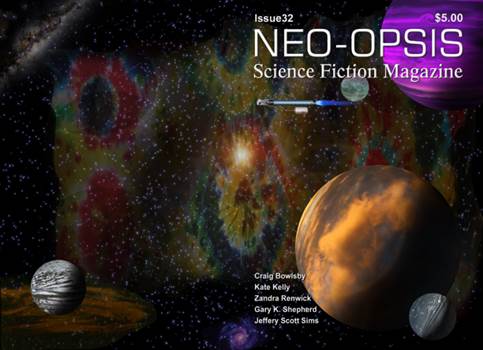 The thirtieth-second issue of Neo-opsis Science Fiction Magazine is available digitally as a PDF or ePub. Click here to buy your copy of this issue!

The cover of issue 31 is Tie Dye Nebula, by Karl and Stephanie Johanson.

In this issue’s editorial Karl talks about Rules of Writing and Tom Switlys.

Karl Johanson’s A Walk Through the Periodic Chart is about Carbon. Illustrations by Karl and Stephanie Ann Johanson.

The first story in issue thirty-two is Craig Bowlsby’s “The Day the Earth Didn’t Stand Still.” Craig has published recent short stories in Neo-opsis, Polar Borealis, and Aethlon, the sports literature magazine. He has a story coming up in the Jayhenge anthology on Joining Forces (out of Sweden) and recently placed a story on the Tall-Tale T.V. podcast. In previous years Craig wrote 3 stories for Lynda Williams’ continuing Okal Rel world.

The second story is Kate Kelly’s “The Forgotten City.” Kate’s short fiction has appeared in a variety of magazines and anthologies. Her collection, The Scribbling Sea Serpent, is available from CFZ Publishing. Her YA novel Red Rock was published in 2013 by Curious Fox.

The fourth story is “Other When” by Zandra Renwick. Zandra lives in a crumbling stone heritage manor in the heart of Canada’s capital city. Her award nominated fiction has been translated, podcast, performed on stage, and is currently in development for television. Find her at www.zandrarenwick.com, or sporadically at various virtual haunts as @zandrarenwick.

The fifth story is, “Sometimes I Miss Manhattan” by Gary K. Shepherd. Gary has been writing for over fifty years now, which amazes him sometimes. His short stories have appeared in such publications as Buzzymag.com, Cirsova Heroic Fantasy, Bloodbond, Another Realm, Schrodinger’s Mouse and Millennium SF. He has also published non-fiction articles in Military History, Cobblestones, Accent on Living, the Compleat Mother, and Parent to Parent. In addition, his short story, “Night of the Vampire” won first place in the SF division of the annual Writers Digest genre fiction contest. He edits the Southern Illinois Peace Coalition newsletter and United World magazine, which is published by the Coalition for Democratic World Government. He lives in Carbondale, Illinois, where he works at the Southern Illinois University library. He and his wife Joyce, a teacher aide, have four grown children scattered around the world.

The sixth story is “The Secrets Behind the Canvas” by Jeffery Scott Sims. Jeffery is a degreed anthropologist and author of dozens of short stories published in magazines and anthologies, makes his home in Arizona, a region he has explored and photographed for several years, and which forms the backdrop for many of his sinister tales. He is the creator of the serial characters Professor Vorchek, modern investigator of strange mysteries, and Jacob Bleek, cunning sorcerer of a dark, antique era. His recent publications include a volume of Weird Tales, Science and Sorcery III; the republication of The Journey of Jacob Bleek; and the short stories "The Master of Kirgusk," "The Mystery of the Egyptian Biscuit," "The Watcher Within," "The Forbidden Chapter," "The Sedona House," and "At the Feet of Poteauje." Full information on his writings and publications, and a growing collection of essays devoted to the weird tale, may be found at the author's literary web site: http://simsweird.infinityfreeapp.com/index.html

Reviews this issue are of the TV series Travelers, Wonder Woman 1984 (reviewed by Dr. Robert Runté), Portal – The Sound of Silence (YouTube video based on the game Portal), and the Netflix series Daybreak.

The cartoon strip Maynard and the Cheese returns to Neo-opsis in this issue.

The Last Two Pages is “Thoughts About Books and Shows and Art” by Stephanie Ann Johanson.