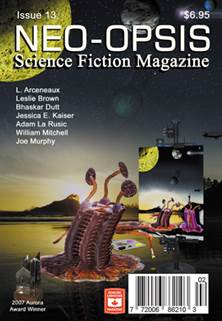 Karl Johanson’s editorial this issue is Thanks to Contributors. Neo-opsis Science Fiction Magazine won the 2007 Aurora Award for “Best Work in English Other”.

This issue, Karl Johanson’s A Walk Through The Periodic Chart deals with Elemental Spectacles, and an imaginative idea for increasing the budget of NASA.

The first story in issue thirteen is Proxy Servers, by L. Arceneaux. L. Arceneaux has published fiction (as L. R. Snow) in the speculative anthologies From the Trenches and Shadow Box. After living in such exotic lands as Japan, England, Texas, and Michigan, she now resides in Southern California, where, strangely, her fascination with dystopias has flourished. (She maintains, however, there is no correlation.)

The second story is Junk Wars, by William Mitchell. (Illustration by Stephanie Johanson) William is 34 years old and works in the aerospace industry. He lives in London with his fiancée Emma, and writes in his spare time. His previous work has appeared in The Book of Dark Wisdom, Horrors Beyond and Midnight Street, and he is a member of the T-Party writers’ group.

The third story is The Widower’s Fairy, by Joe Murphy. (Illustration by Stephanie Johanson) Joe lives in Fairbanks, Alaska with his wife, Veleta, two dogs, and three cats. He’s fascinated by gadgets of every kind, but especially those with clockwork mechanisms. He’s sold fiction to numerous magazines including Realms of Fantasy and Strange Horizons, and several anthologies including Fantasy: The Best of 2006. He haphazardly maintains a webpage at: www.mosquitonet.com/~jmurphy/index/Page_1.html

The fourth story is Sirens, by Leslie Brown. Leslie is a research technician working in the Alzheimer’s field. She has previously published stories in On Spec and in several anthologies including Open Space, Thou Shalt Not, Loving the Undead and the upcoming Sails and Sorcery. She is a member of Lyngarde, an Ottawa Writers’ Group.

The fifth story is The Game of War, by Jessica E. Kaiser. Jessica lives in northern Indiana. Her hobbies include acquiring education, reading, baking, teaching English comp, and belly dancing. She has previously had fiction published in Forgotten Worlds, Loving the Undead (From the Asylum Books & Press), Yog’s Notebook, and Triangulation:End of Time. Life goals include world domination—if you want something done right, you have to do it yourself—and leaping tall buildings in a double bound. Ketchup (Heinz only, thank you very much) is her favourite condiment and she abhors small talk.

The sixth story is Terror Delectable, by Bhaskar Dutt. Bhaskar was born on the edge of the western desert during a sandstorm that howled like a thousand demon wolves. He spent a nomadic childhood crawling across the broad, dry face of the subcontinent. As a young man, he came to the new world and spent years in the humid swamplands of the southeast. He went finally to the rain-swept hills of the northwestern shore and there, some believe, he remains still.

Technology News includes news of a computer that is capable of playing a perfect game of checkers.

Karl Johanson writes about the science fiction conventions Conversion 23: Calgary, AB and Vcon 32 Richmond, BC. Photos from the conventions are included.

Karl Johanson devotes The Last Two and a Half Pages to Capturing a Feeling with Music: 2. Karl continues his theories on science fiction music, and music that feels sci-fi.