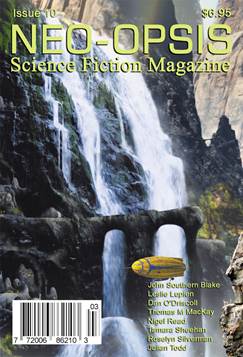 Dan O’Driscoll created issue ten’s cover, Canyon. Dan claims that his artistic ability started with dinosaurs, the ones he used to draw in the margins of his schoolbooks. He moved on to expressing his ideas in art classes. The influence of friends and instructors increased his interest in sketching and painting, and eventually lead him to explore the possibilities of digital rendering and three dimensional models and environments. Dan O’Driscoll also created the cover image for Neo-opsis Science Fiction Magazine issue five. Dan’s artwork continues to draw more and more attention. Collectors should take note.

Karl Johanson’s editorial this issue is Source of Inspiration.

Karl Johanson’s A Walk Through The Periodic Chart deals with Hafnium.

The first story in issue ten is Twenty, by Tamara Sheehan. Tamara writes lots of fantasy and a little science fiction, from a small, squalid apartment in Victoria, British Columbia. You can find her work in Alien Skin, Susurrus Madness and Bewildering Stories.

The second story is Moby’s Riff, by Roselyn Silverman.  Roselyn worked for the US Labor Department, CBS, and finally New York City Government as an econometrician. She could never decide whether that profession, which is a form of science fiction, should have the primary emphasis on the science or the fiction. Moby’s Riff can be fitted in a framework of several stories Roselyn has written that envisage space exploration privatized as a form of primitive ruthless compeditive capitalism. She has had stories apear in the on-line magazines, Jackhammer and Gateway SF, and in the print magazines Dark Regions and Spring 1999. The latter two were translated into Hebrew, in the Israeli publication Dreams in Aspamia.

The fourth story is A Moment of Dying, by John Southern Blake. John resides in Calgary, teaching the liberal arts to undergraduates and occasionally publishing works of reputable scholarship. His fiction has appeared in On Spec. (Illustration by Stephanie Johanson)

The fifth story is The Honeymoon, by Nigel Read. Nigel has had stories and poems published in Full Unit Hookup, Neoopsis Science Fiction Magazine, the Machinations and Encounters anthologies, Aoife’s Kiss (online), two Borderlands convention handbooks, Antipodean SF, and Visions. Nigel has also been an editor with Andromeda Spaceways Inflight Magazine. He is currently editing two anthologies, and he is a regular book reviewer for Visions. (Illustration by Stephanie Johanson)

The sixth story is In Human Judgment, by Thomas M. MacKay.

The seventh story is The Posthomo, by Leslie Lupien. Leslie is an American immigrant (now a Canadian citizen), with stories published in Absolute Magnitude, Terra Incognita, On Spec, and the Canadian anthology North of Infinity. Leslie has received two certificates as semi-finalist in Ron Hubbard’s Writers of the Future Contest.