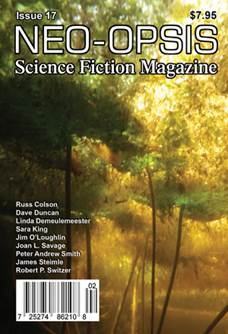 The cover, Other World, indeed makes one think of an alien forest on some strange planet, but the original image is not from someone’s imagination. The cover is actually a digital photo, taken by Stephanie Johanson, of the underside of her pond.

This issue Karl Johanson’s A Walk Through the Periodic Chart is titled Nitrogen. It is about some of the uses for nitrogen, mentions that high levels of nitrogen contributes to oceanic dead zones, and also goes a bit off format to discuss environmental issues.

This first story in issue seventeen is Moderator (3,700 Words), by Sara King. Alaskan author, Sara, grew up with a fanatical obsession with fantasy...and an active disdain for science fiction. Somehow, through a freak twist of Fate, she ended up writing science fiction. She's now working on her 13th novel, and is thrilled to be represented by agent Amy Boggs of the Donald Maass Agency. She's always looking for brave guinea pigs interested in actiony sci-fi goodness, and they can sign up for free novels through her website, www.kingfiction.com.

The second story is Thirteen (2,549 words), by Peter Andrew Smith. Peter lives and works in Antigonish, Nova Scotia with his wife Meredith. They share their home with two small dogs, Willie and Barkley, who believe that the best things to bark at are outside of their sterilized living space. Peter's story "A Time for Everything" appeared in Neo-opsis #3. A complete list of all of Peter's fiction and non-fiction works can be found at www.peterandrewsmith.ca.

The third story is Finders Weepers (3,060 words), by Robert P. Switzer. Robert story Silence in Screamland appeared in issue 11 of Neo-opsis. His fiction has also appeared Tales of the Unanticipated.

The fourth story is Time Leeches and the Evolution of Annie Ross (3,898 words), by Linda DeMeulemeester. It is Linda's third story in Neo-opsis Science Fiction Magazine. Her fiction has also appeared in Canada's Story Teller Magazine, ChiZine, and Twilight Tales. Linda's YA novel, The Secret of Grim Hill, has recently been published by Lobster press.

The fifth story is Dead Zoned (992 words), by Jim O’Loughlin. Jim lives in Cedar Falls, Iowa, where he coordinates the Final Thursday Reading Series (http://geocities.com/finalthursday). His science fiction has appeared in Quantum Muse, From the Asylum, and Everyday Weirdness.

It is a real treat this issue to have Ancestor (92 words), a poem by Dave Duncan. Dave is the author of more than forty fantasy and science fiction novels. His novels West of January and Children of Chaos won Aurora Awards. At the time that this issue went to print, Dave had been short listed for the Endeavour Awards for his novel Ill Met in the Arena and short listed for the Sunburst Award for his novel The Alchemist's Code. A listing of his works is available at: www.daveduncan.com.

The sixth story is Communiqué (2,642 words), by James Steimle. James gave up a frightening career in the legal field so that he could drown in the dust of books as a librarian. A gardener of fear-inspiring zucchini, graduate student of Education, hobby physicist, and romantic father, this author of The Ghost People (Sam's Dot) has had fiction anthologized in Forbidden Speculation (Golden Acorn Press) and shared stories through Albedo One, Tales of the Talisman, Nova Science Fiction, Black Petals, and Dark Horizons. Visit him at www.steimle.us.

The seventh story is The Seed (2,700 words), by Joan L. Savage. Joan is a musician, and lives in Saskatoon with a houseful of animals. Her short stories have been published in Intergalactic Medicine Show, On Spec, Dreams & Visions, Mercury, and other magazines. She is a graduate of Orson Scott Card's Literary Boot Camp, and Viable Paradise. She blogs (when she blogs) at www.joansavage.blogspot.com

The eighth story is The Antidote (3,715 words), by Russ Colson. Russ is a professor at Minnesota State University Moorhead where he teaches planetary science, meteorology, and geology. He worked at the Johnson Space Center in Texas for five years, followed by six years of research at Washington University in St. Louis where, among other things, he studied how a lunar colony might mine oxygen from the local rock. He writes a variety of speculative fiction stories.

Awards News includes the 2009 Hugo Award Nominees, the winners of the 2008 Nebula Awards, and the nominees for the 2009 Aurora Awards.

SF News includes obituaries for novelist and poet Phyllis Gotlieb, and editor and co-founder of Locus Charles N. Brown. There is also mention of the World Science Fiction Convention being held in Montreal, Quebec from August 6 to 10, 2009.

In Science News there is how to get involved in classifying galaxies, and an image of Saturn’s moon Enceladus,

On The Last Page, we have Life Changing Books a short article by Stephanie Ann Johanson, and Other Worlds, About the Cover by Karl Johanson.