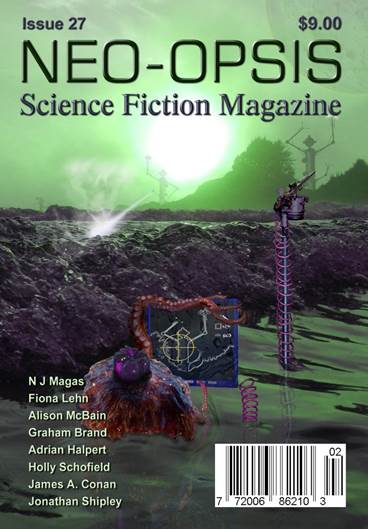 The twenty-seventh issue of Neo-opsis Science Fiction Magazine is 8” by 5 ½”, 80 pages.

The cover of issue 27 is Waves, by Karl Johanson.

Karl’s editorial is Who Are Rey’s parents, some conjectures as to the parentage of the character Rey in Star Wars the Force Awakens.

Karl Johanson’s A Walk Through the Periodic Chart is about the element Helium. There is a brief aside about Carbon in the news. Illustration by Stephanie Ann Johanson.

The first story in issue twenty-seven is The Hold, by James A. Conan. James is a Toronto based author of speculative fiction. He studied Politics, History, and International Development at Trent University.

The second story is Khol Fusion by Jonathan Shipley. Geoff is a Canadian writer of horror, science fiction - occasionally of a darkly humorous bent - and roleplaying games.

The third story is Customer Service by. N J Magas, who is a Canadian born speculative fiction writer currently living in Kyoto, Japan with her partner of five years and a popcorn addicted cockatiel. Her work has appeared in Amok: An Anthology of Asia-Pacific Speculative Fiction and Growing Concerns: An Eco-Horror Anthology. N J is a hermit and prefers to communicate via email, though she can be poked on twitter @njmagas.

The fourth story is Blanche’s Last Spike by Holly Schofield. Holly has had stories appear in many publications including Lightspeed, Crossed Genres, Tesseracts, and Neo-opsis # 25.

The fifth story is The Making of ENSEMBLE-B by Fiona Lehn. Fiona wrote the novelette “The Assignment of Runner ETI,” which was a winner of the Writers of the Future international writing contest (2009). Her novella “The Last Letter” was published by Aqueduct Press (2011). She is a member of SFWA and has an MFA in Creative Writing.

The seventh story is Minghua’s Curse by Adrian Halpert. Adrian is a native of Kingston, Ontario, where he just completed a Master’s Degree in Latin American History at Queen’s University. When not busy with school, he is involved with Tae Kwon Do, playing video games, or haunting local coffee shops.

The eighth story is The First Hundred, by Graham Brand. Graham is trained as a metallurgist, casting gold bars in Zambia before returning to the UK and drama school. He spent ten years in the theatre, as an actor, musician and musical director, before becoming a father and switching to IT project management, which has taken him round the world. He now lives in the Yorkshire Dales and blogs far less frequently than he should at crosstimers.com.

Reviews this issue are of Jason Borne, and Westworld.

Awards news includes listings for the Sunburst Awards, the Hugo Awards, the Nebula Awards and the Aurora Awards.

There are write ups on the 2016 conventions KeyCon in Winnipeg and VCon in Vancouver, BC.

The Last Four Pages is the article The Plumbob Solution, by Karl Johanson. In this article Karl suggests a possible safer way to launch an Orion type nuclear propulsion spacecraft.

See a review of this issue at SFRevu: 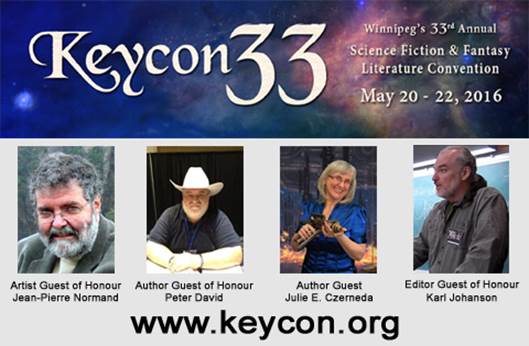