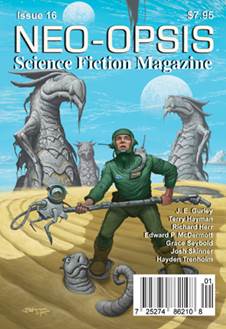 The cover this issue is Xenobiology 101: Field Trip by Jim Beveridge. Jim has been drawing for most of his life. He began freelancing on band posters and album covers as well as airbrushed award-winning vehicles or anything that needed a slightly off-centered left-handed aesthetic. In 1991 he started illustrating for On Spec magazine. His interest now is in the computer as an art tool, which has led to working in game art and online design. After several nominations he won an Aurora Award in 2002. His first cover for a full-length novel was for Lisa Smedman’s The Apparition Trail. He is also one of the featured artists in Visions From The Edge. Jim's art is also featured as the CD cover and intro for the documentary as well as Wheel of Time websites such as Dragonmount.com and www.jamesbeveridge.com

Karl Johanson’s editorial for this issue is Inspiration From a Point in the Sky, a brief discussion on the impact of the planet Mercury on literature.

This issue Karl Johanson’s A Walk Through the Periodic Chart is titled Curium and Paper Starships. Karl acknowledges Phillip Freeman for scientific and mathematic analysis of the ideas presented in this article.

This first story in issue sixteen is Symphony of Stones (5,200 words), by Hayden Trenholm. Hayden’s short fiction has appeared in Neo-opsis Science Fiction Magazine, On Spec, TransVersions, Tesseracts, Challenging Destiny, Talebones and on CBC radio. His short stories, “The Luck of Willie Lumen” 2005, “Like Monsters of the Deep” 2006, and “Lumen Essence” 2007, were nominated for Aurora Awards (Canada’s SF Awards). Bundoran Press released Hayden’s new novel, Defining Diana, in 2008. Hayden lives with his wife, and fellow writer, Elizabeth, in Ottawa where he does research for the Senator for the Northwest Territories.

The second story is Welcome to my World (3,776 words), by Jim Gurley. Jim is a fifty-two year old retired chef living in the deserts of Arizona with his wife and two cats. Jim has had stories published by Simulacrum, Red Scream, Dawnsky, Nocturnal Ooze, Alien Skin, Aiofe’s Kiss, and several others, including a story in the Best of Neo-opsis anthology by Bundoran Press.

The third story is She (871 words), by Josh Skinner. Josh was born in Calgary, Alberta, but has spent most of his life wandering around the country that he loves. In-between train stations, he writes. His fiction has appeared in Bewildering Stories, Flash Me Fiction and others, including upcoming issues of Worlds of Wonder and Afterburn SF.

The fourth story is Diplomacy (7,004 words), by Richard Herr. Richard started with a career in professional theatre in New York. He migrated into staging corporate presentations, which business he’s been in for over three decades. He recently decided to pay occasional visits to fascinating off-world environments and ha s been churning out humorous sci-fi pieces. “Diplomacy” is from his collection of tales from a place called The Star Board Café.

The fifth story is Brought to Life (947 words), by Grace Seybold. Grace has lived in Montreal for the past seven years, where she spends her time working for a Quaker environmentalist group and trying to develop super powers by wishing really hard. Her writing has been published in Aoife’s Kiss, Polymancer, the Montreal Gazette and the Tesseracts Twelve anthology.

The sixth story is Crash (2,161 words), by Edward P. McDermott. Edward was born in Toronto and has pursued a professional career during the day, while taking writing courses, joining writer’s groups, and writing at night. When not writing, he spends his time sailing and fencing, and working as a movie extra. Currently, Edward may be sailing his sailboat off the Florida Coast, perhaps in the Bahamas.

The Last Page, written by Stephanie Ann Johanson, is about how listening to music and audio books influence her painting and soapstone carving styles.