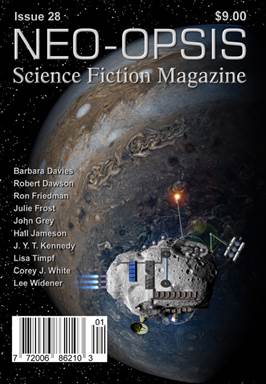 The twenty-eight issue of Neo-opsis Science Fiction Magazine is 8” by 5 ½”, 80 pages.

The cover of issue 28 is Living in a Rock, by Karl Johanson.

Karl’s editorial is The Nerfing of Data, discusses a major change to the character Data, part way through the series Star Trek: The Next Generation.

Karl Johanson’s A Walk Through the Periodic Chart is about the element Tungsten. There are brief asides about Selenium, Helium, and Hydrogen in the news. Illustration by Stephanie Ann Johanson.

The first story in issue twenty-eight is Dissonance, by Ron Friedman. Ron’s short stories have appeared in Galaxy's Edge, Daily Science Fiction and in other magazines and anthologies. He received ten honorable mentions in Writers Of The Future contest, co-edited  three anthologies, and his novel, Typhoon Time, will soon be released by WordFire Press. Ron is a Calgary Herald #1 bestseller author and a Best Short Fiction finalist in the 2016 Aurora Awards.

The second story is Hindsight by Hall Jameson. Hall is a writer and artist who lives in the northwestern United States with her husband and an assortment of other furry and feathered critters. Her work has appeared in Phobos Magazine, Allegory, Drabblecast, and Fantasy Scroll Mag.

The first poem is Foreshadowing by Lisa Timpf. Lisa is a freelance writer who lives in Simcoe, Ontario. Her writing has appeared in a variety of venues, including Chicken Soup for the Soul: Christmas in Canada, Small Farm Canada, Morel Magazine, The Martian Wave, Outposts of Beyond, New Myths, and Scifaikuest.

The third story is Time Beasts by. Barbara Davies. Barbara’s short fiction has appeared in Far Orbit, The Lorelei Signal, Lacuna, Neo-opsis #7, and Tales of the Talisman among others anthologies, ezines, and magazines. Her website is: www.barbaradavies.co.uk

The fourth story is Broken Dishes by J. Y. T. (Jennifer) Kennedy. This story was partly inspired by playground games introduced to her by her thoroughly Canadian children, and is her second to appear in Neo-opsis. She writes stories, and poems, which can usually be classed as fantasy or SF, including her fantasy novel, Dominion.

The fifth story is The Flight of the Osprey by Robert Dawson. Robert has had work appear in Nature, AE, and numerous other periodicals and anthologies.

The sixth story is Wild Irish Rose by Julie Frost. Julie has had short fiction appear in Cosmos, Azure Valley, Unlikely Story, and many other publications. She is a Writers of the Future winner. Her novel, Pack Dynamics, was recently published by WordFire Press.

The seventh story is Fuchsia Thought by Corey J. White. Corey is a writer of science fiction, horror, magical realism, and other, harder-to-define stories. His first book, Killing Gravity, is out through Tor.com Publishing in May, 2017. Find him at coreyjwhite.com and on twitter at @cjwhite.

The eighth story is He Was So Old, by Lee Widener. Lee grew up in the Midwest and now lives in Portland, Oregon, where he runs Welcome to Weirdsville Radio. His Bizarro novella "Rock N Roll Head Case" was published in 2015 and his Weird Fiction collection "Under the Shanghai Tunnels and Other Weird Tales" in 2017.

The second poem is More than Dreams Alone by John Grey. John is an Australian poet and a US resident. Recently published in New Plains Review, Perceptions, and the anthology No Achilles, with work upcoming in Big Muddy Review, Gargoyle, Coal City Review, and Spoon River Poetry Review.

Karl has included a write up about Tsukino Con 2017.

Reviews this issue are of Passengers (movie by Universal Pictures), Dominion of Giants (adult colouring book by Eric Messinger), and Hidden Figures (movie by Fox 2000 Pictures).

Awards news includes listings for the Hugo Awards, the Nebula Awards and the Aurora Awards.

There is a write up on the 2017 convention Tsukino Con in Victoria, BC.

The Last Four Pages is the article Women Leads in SF, by Karl Johanson.