The cover of issue twenty-two is Goodbye, by Karl Johanson.

Karl's editorial is his take on “The Best Line in Movie History.”

This issue Karl Johanson’s A Walk Through the Periodic Chart is titled “Elements Named after People.” Karl discusses elements named after famous people and some guy named Einstein. Illustration by Stephanie Ann Johanson.

The first story in issue twenty-three is Spindrift Metamorphosis (8,969 words) by Adria Laycraft, You can find fiction by her in Hypersonic Tales, DKA Magazine, and In Places Between. Adria is a graduate of the Odyssey Fantasy Writer’s Workshop, a member of the Imaginative Fiction Writers Association (IFWA), and a slush reader for Edge Press. She received honors from SAIT in Journalism Arts in 1992, and works as a freelance copywriter, just recently completing her third ghostwritten non-fiction book.

The second story is The King of the Shrews (5,968 words) by Dale Carothers Dales work has appeared in Electric Spec, Aoife’s Kiss, Kaleidotrope and Silver Moon, Bloody Bullets: An Anthology of Werewolf Tails, and the anthology Dreams of Steam.

The third story is Chasing Happiness (3,800 words) by Hayden Trenholm and Liz Westbrook-Trenholm.

Hayden Trenholm has published over 15 short stories in Talebones, Neo-opsis, On Spec and Challenging Destiny among others, won the Prix Aurora Prize in 2008 for Best Short Form and was nominated for Best Long Form Fiction in 2009 for Defining Diana, the first in the Steele Chronicles trilogy, published by Bundoran Press. The second and third books in the series are, Steel Whispers, and Stealing Home.

The fourth story is And the Rocks Cried Out (6,000 words) by Russ Colson. Russ lives with his wife, Mary, on a farmstead in northern Minnesota, far enough from city lights to see the Milky Way and the aurora borealis. He teaches planetary science, meteorology, and geology at Minnesota State University Moorhead and in 2010 was selected by the Carnegie Foundation as US Professor of the Year. He writes variety nonfiction and speculative fiction stories, publishing in Neo-opsis, Clarkesworld, New Myths, Aurora Wolf and others.

The fifth story is Ten Thosand and One (5,313 words) by M. Elisabeth Fortune Elisabeth graduated from the University of Minnesota – Morris, where she managed to earn a bachelor’s degree in psychology and avoided taking a single English class. She currently divides her writing time between customer service emails and speculative fiction. We’ll let you guess which one she enjoys more. Her short fiction has been published in Nth Zine and Fantasic Frontiers. More information can be found on her blog at: http://margaretfortune.wordpress.com.

The sixth story is Dead Ringer (781 words) by Tamarah Sheehan Tamarah’s story Stormy Bamboo, was published by Drollerie Press in 2012. Her stories have been nominated for the Aurora and ALA Rainbow awards.

Convention write ups this issue are for VCon 37, held in Vancouver, BC in September 2012, and the gaming convention GottaCon 2013, held in Victoria, BC, in February 2013. (www.vcon,ca and www.gottacon.com)

Reviews this issue are of Becoming Batman by E. Paul Zehr (review by Karl Johanson) and of Seraphina by Rachel Hartman (review by Robert Runté).

The Last Two Pages by Karl and Stephanie Ann Johanson is titled Multimedia, is a discussion of movies which change formats for effect. 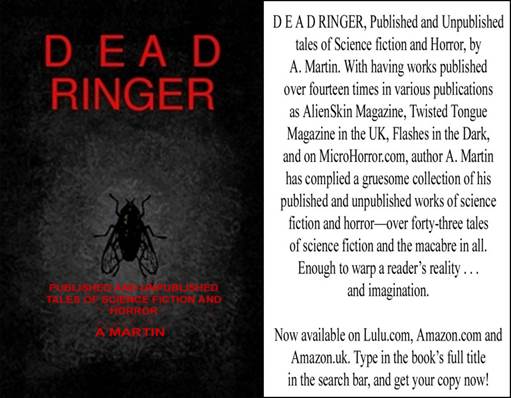