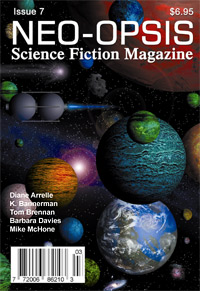 Karl Johanson designed and created the cover of issue seven. Exploring a Crowded Universe is a mixed media work that Karl started as a painting, and then completed digitally. Karl Johanson is the editor of Neo-opsis Science Fiction Magazine. He has an artistic talent that never seems held back by his being red/green colour blind.

Karl Johanson’s editorial this issue is Houston, We Have a Solution (26 years too late), where he talks about Apollo 13.

This issue, Karl Johanson’s A Walk Through The Periodic Chart deals with Argon. With the article is a related cartoon by Karen Lightbody (formerly Kazanowski).

The first story in issue seven is The Mask and the Maze, by K. Bannerman. (13,330 words – Novelette) K. Bannerman has had fiction appear in Room Of One's Own, Parabola magazine, Lichen Literary Journal and Premonitions Magazine, and Double Dragon Publishing published K. Bannerman’s novel The Tattooed Wolf in 2004. (Illustration by Stephanie Ann Johanson)

The second story is Thirty-Three, by Tom Brennan. (3,969 words – Short Story) Tom is 39 and he lives in Liverpool, UK with wife Sylvia and many cats. A former winner in the Writers of the Future contest (XVIII), he has two novels out at the moment: The Debt and One True Prince. He enjoys a wide variety of fiction, including SF, Fantasy and Mystery/Thriller; he’s currently working on Doktor Glass, an alt.history Victorian Fantasy.

The third story is The Rain Queen, by Barbara Davies. (3,683 words – Short Story)  Barbara lives in the English Cotswolds. Her fiction has appeared in Marion Zimmer Bradley’s Fantasy Magazine, Andromeda Spaceways Inflight Magazine, The Eternal Night, Fables, and Kimota (her story won their Best Story Award for 1999), and e-anthologies Ideomancer Unbound and Crossings, among others. She reviews fantasy fiction for Starburst. (Illustration by Stephanie Ann Johanson)

The forth story is Dead People’s Stuff, by Diane Arrelle. (3,434 words – Short Story) Diane has sold more than 60 short stories to magazines and anthologies including Barnes and Nobel Crafty Cat Crimes, Oui, Terminal Fright, Pirate Writings, Blue Murder and Be Mine. (Illustration by Stephanie Ann Johanson)

The fifth story is Like Minds, by Mike McHone. (805 words – Short Story) Mike is a writer/journalist living in southeastern Michigan. His work has appeared in small and mainstream presses such as Blood Moon Rising and American Zoetrope. He is currently a music reviewer for Clamor Magazine and a columnist for the Detroit music magazine The Record.

Karl Johanson talks about Westercon 58 in The Last Three Pages, accompanied by photos taken during the convention.