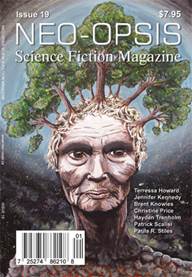 The nineteenth issue of Neo-opsis Science Fiction Magazine is 8” by 5 ½”, 80 pages, Published June 17, 2010. Our apologies for the delay, we were dealing with some technical problems.

The cover of issue 19 is Mother Earth, by the Victoria BC artist Christina Price. Christina is a Grade 11 student at Pacific Christian High in Victoria, BC. She has been taking art classes since she was nine and enjoys conveying her ideas through her art. She is interested in the Earth and the environment and enjoys discovering new ways in which to represent them through her art. Christina enjoys painting images that cause people to think about the subject matter in a different or deeper way. She is also a great fan of fantasy books. See a larger image of the cover.

Karl Johanson’s editorial for this issue is The Great Fizzle Before the Singularity. Karl hypothesizes about the future computers.

Letters to the Magazine this issue are from: Brian Narelle (Lt. Doolittle in the movie Dark Star, and much more), Gerry Cury, Lynda Williams (author of the Okal Rel series), Katie McLean, John Kaminski¸ and Alison Groves.

This issue Karl Johanson’s A Walk Through the Periodic Chart is titled Phosphorus, though Karl slips off topic to reminisce about swimming at McKenzie Byte.

The first story in issue nineteen is The Burden of Fire (5,320 words), by Hayden Trenholm. Hayden has had short fiction appear in On Spec, TransVersions, Tesseracts6, Neo-opsis, Challenging Destiny, Talebones, Gaslight Grotesque and on CBC radio. In 2008, he won an Aurora for his novella, “Like Water in the Desert.” Anvil Press published his first novel, A Circle of Birds. His novel, Defining Diana, released by Bundoron Press in 2008, was nominated for an Aurora Award. A sequel, Steel Whispers, was published in August 2009, with the third in the Steele Chronicles, Stealing Home due out in 2010. (The Burden of Fire illustration is by Karl Johanson.)

The second story is The Kol Effect (3,700 words), by Brent Knowles. Brent is a game designer and author. This is his first story for Neo-opsis Science Fiction Magazine; he has also been published in Not One of Us, Tales of the Talisman and On Spec. In 2009 he placed first in the Writers of the Future Contest (3rd Quarter). He lives in Edmonton with his wife and two sons. Online he can be found at www.brentknowles.com.

The third story is ‘Swordsman Wanted’ (4,522 words), by Patrick Scalisi. Patrick is a magazine editor and aspiring author from Connecticut. He has published fiction in several magazines, including The Willows, Twisted Dreams and Space Westerns, among others. When he's not writing, Pat enjoys watching way too many movies than are good for him, reading more books than he has shelves for and listening to music (his tastes range from classical to classic and modern rock). His website is www.patrickscalisi.com. (The ‘Swordsman Wanted’ illustration is by Stephanie Johanson.)

The fourth story is Not Human (6,649 words), by Teresa Howard. Teresa is currently employed as the technology coordinator and computer lab instructor at a local elementary school in Birmingham, Al. Her publication credits include: “A Forest of One,” Aofie’s Kiss, “Storm at Hailer,” Amazing Journey’s Magazine, “Dragons Tale,” Dragons Composed, “Nellandra’s Keeper,” Sword and Sorceress 24, “Baby in the Snow,” Pantechnicon.net, “Putting on the Blue,” Beyond Centauri and “Fang Rot,” Escape Clause.

The fifth story is Touching Down (4,600 words), by J.Y.T. Kennedy. J.Y.T. Kennedy is a Canadian writer, who has published several pieces of speculative fiction in the past, including the fantasy novel Dominion with DragonMoon Press.

The sixth story is An Even Trade (1,700 words), by Paula R. Stiles. Paula has sold fiction to Strange Horizons, Writers of the Future, Jim Baen’s Universe, Futures, OutShine and other markets. Her website is at: www.geocities.com/rpcv.geo/other.html.

Cartoonist Bill Thomas has two wonderful cartoons in issue nineteen. Bill has been a professional cartoonist and graphic artist for eight years. His work has appeared in numerous magazines and books. Bill attended Edinboro University in Erie, Pa. and studied graphic arts. He has also been a cartoon editor for a magazine in LA. Bill loves his work and also making films. He’s a multi-media kinda guy. He loves making people laugh; if you’ve cracked up over one of his cartoons, he’s done his job.

News includes: The 2010 Aurora Awards winners, the 2010 Nebula Awards nominees, the 2010 Hugo Awards nominees, science news about a pair of white dwarf stars, who was named the 2010 Damon Knight Memorial Grand Master by the Science Fiction Writers of America, and an acknowledgement of the death of Dan O’Bannon.

The Last Three Pages is Substitutions for Outdoor Lights by Karl Johanson. Karl spins hypotheses and theories to boggle your mind, all in the name of conservation.

Copies of this issue are still available!