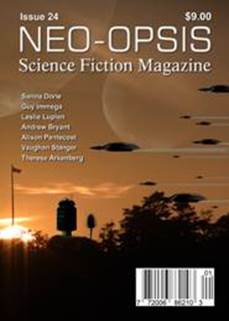 The cover of issue twenty-four is Contrails, by Karl Johanson.

Karl's editorial is titled “New Information about a Widespread Character in Science Fiction.”

Letters to the Magazine this issue are from: Evan Dickson, Adria Laycraft, Guy Pace and from Brian of Rainbow Comics, Sioux Falls, SD.

The element discussed this time in Karl Johanson’s A Walk Through the Periodic Chart is “Potassium.” Karl had inadvertently left out two “Elements Named after People,” in issue 23, so they are included in this issue.

The first story in issue twenty-four is Change of Heart (8,969 words) by Guy Immega. Guy is a graduate of Clarion West 2006 (Seattle), where Vernor Vinge was one of his teachers. His short story “A Little Knowledge” in Postscripts received an Honorable Mention in Years Best Science Fiction Twenty-Sixth Annual Collection. Guy did the world building for Variable Star by Robert Heinlein & Spider Robinson.

The second story is Mutability (4,931 words) by Alison Pentecost. Alison was born in Montreal, but grew up in the suburbs of Toronto before returning to her city of birth to attend university, and to never leave again. She has a bachelor’s in Astronomy and Geophysics, and a Masters in Planetary Sciences, but left research for a career in IT. She is currently a married, stay at home mom with three young sons, who writes whenever she can find the time or the energy.

The third story is Why Did the Vampire Cross the Road? (5,000 words) by Sarina Dorie. Sarina has shown her art internationally and sold illustrations. She has sold stories to Daily Science Fiction, Flagship, Allasso, New Myths, Bards and Sages, Untied Shoelaces of the Mind, Penumbra, Crossed Genres as well as others. Sarina’s fantasy novel, Silent Moon, won two second place and three third place awards from chapters of Romance Writers of America. www.sarinadorie.com

The fourth story is In Every Dream Home (888 words) by Vaughan Stanger. Vaughan recently retired from an engineering job that exposed him to all manner of exciting technologies. Now he writes science fiction for a living. His stories have seen publication in various noted magazines and anthologies, including Interzone, Nature Futures, Postscripts, Daily Science Fiction, End of an Aeon and Neo-opsis. Unlike most writers he is not owned by a cat. http://www.vaughanstanger.com

The fifth story is Doomsday in a Cone by Leslie Lupien. Leslie’s story The Posthomo was published in issue 10 of Neo-opsis. He has also been published in Absolute Magnitude, Terra Incognita, On Spec (2), and the Canadian anthology North of Infinity. Leslie has received two certificates as semi-finalist in Ron Hubbard’s Writers of the Future Contest.

The sixth story is Time Passeth Away Like a Shadow (5,427 words) by Andrew Bryant. Andrew lives in Burlington, Ontario. His other publication credits include On Spec magazine.

The final story is Sibial in Exile (5,500 words) by Therese Arkenberg. Therese is a student at Carroll University in Wisconsin. She has fiction published or forthcoming from Beneath Ceaseless Skies, Daily Science Fiction, Fantastique Unfettered, and the anthologies WolfSongs 2, Queer Fish 2, Thoughtcrime Experiments, Warrior Wisewoman 3, and Sword and Sorceress XXIV. Her novella, Aqua Vitae, is available from WolfSinger Publications and a novel, Last of the Lesser Kings, has been released by Silver Publishing under the name T.L.K. Arkenberg.

Reviews this issue are of Riddick, by Universal Pictures (reviews by Karl Johanson and by Stephanie Ann Johanson), and Bowl of Heaven by Larry Niven and Gregory Benford (review by Karl Johanson).

The Last Two and a half Pages by Karl and Stephanie Johanson is titled Science Fiction Remote Controls. A write up on the device Jonny Sparks used to control Gigantor, and other cool SF remotes.