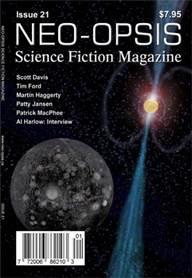 Karl Johanson’s editorial for this issue is Alien Aliens. Karl talks about how some of the aliens in television shows and movies, and what makes them alien.

This issue Karl Johanson’s A Walk Through the Periodic Chart is titled Lunar Gold. In this article, Karl addresses the question of whether or not a Saturn V spacecraft could bring back enough Gold bricks from the moon to pay for the trip, on the assumption that the moon was made of Gold bricks or had a bunch of them piled up and ready to go.

The first story in issue twenty-one is Santiago Dawn (3,594 words), by Patty Jansen. Patty lives in Sydney, Australia. Patty is a finalist in the first quarter of the Writers of the Future Contest with a different story. Patty has stories forthcoming in Andromeda Spaceways Inflight Magazine #46, the Belong anthology (ed. Russell Farr), Midnight Echo #4 and a novella in the Distant Worlds anthology.

The second story is Claire's Touch (3,930 words), by Scott Davis. Scott did no creative writing between 1973 and 2007, and can’t say why. Making up for lost time, he already has 10 stories published. He lives near Boston and travels widely, having heard voodoo drumming in Pétionville, swum in the Nile, taken stomach remedies in Warsaw, and landed a small plane at an airstrip atop an Appalachian mountain ridge. Keep up with his writing exploits at http://universeofpossibilities.blogspot.com. (Story illustration by Karl and Stephanie Johanson)

The third story is Last Call at Duffy's (4,889 words), by Martin Haggerty. Martin currently lives near Atlanta, GA with his wife Beth, daughter Jeanne, and their Collie, Millie “The Wonder Dog”. His day job often cuts into his Science Fiction writing time but he manages to finish an occasional story and soon a novel. This is Martin’s first story to be selected for publication.

The fourth story is Bloodlines (4,020 words), by Tim Ford. Tim is a Calgary born playwright and short story writer. His plays have been performed by Canadian theatre companies Mob Hit Productions and Sage Theatre, and his short fiction has appeared in several print and online publications, including Crossed Genres, Red Penny Papers and Other:____ Magazine. He currently resides in Toronto, and would love for you to follow him on twitter @canucktim to share in his shenanigans. (Story illustration by Stephanie Johanson)

The fifth story is Time's End Tavern (2,479 words), by Patrick MacPhee. Patrick has been published in the UK magazine Etheral Tales. He has also had work short-listed for Andromeda Spaceways Inflight Magazine and Allegory Magazine.

Al Harlow interview. Al Harlow is a musician from Vancouver, BC. He has been with the band Prism since the 1970’s and is currently the lead guitarist and lead singer. www.prism.ca.

This issue includes a write-up about the Canadian convention VCon 35, held in Vancouver, BC, September 30 - October 2, 2011.

SF News includes: The 2011 nominees and winners for the Aurora Awards, the Hugo Awards and the Sunburst Awards.

Science news includes a brief mention of "zombie stars," a massive electric current detected in a galactic scale jet from a black hole, and omoebae of unusual size recently discovered in the Mariana Trench.

The Last Two Pages Stephanie Johanson talks about learning to enjoy reading, and how important writer Anne McCaffrey's stories are to the science fiction and fantasy genres.