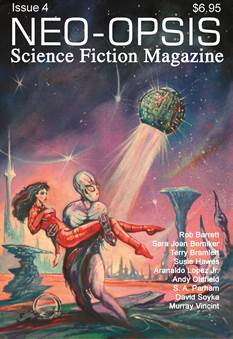 Murray Vincent believes that a lot of Sci-fi fans will know the history of SF art from the early pulp magazines, so he feels that most of these fans will appreciate the humour in his cover. Murray lives in the County of Worcestershire, England. He began drawing at around the age of five, and took up painting at around the age of ten. In his teens, Murray developed his skills and techniques by copying the paintings and drawings of the masters, and he still sometimes borrows from the renaissance. Murray holds a UK higher national diploma in General /technical illustration. Murray has been painting for some forty years.

Karl Johanson’s editorial this issue is Why is 1984 Considered a Dystopia When Lord of the Rings Isn’t?

In A Walk Through The Periodic Chart: Uranium Karl Johanson tries to answers the question, “How do you find out what percentage of the Earth’s crust is Uranium?”

Karen Kazanowski illustrates Karl’s solution with one of her wonderful cartoons.

The first story in issue four is Talk of the Town, by David Soyka. (4659 words – Short Story) David has published short fiction in Altered Perceptions, Byline, Carriage House Review, Circle Magazine, Santa Barbara Review and Shadowland. His non-fiction has appeared in The New York Times, Central Jersey Monthly, Practical Homeowner and various New Jersey-based newspapers. He also writes for The SF Site, Science Fiction Weekly, Bookreporter.com, Strange Horizons and The Third Alternative as well as criticism for Extrapolation and Nova Express. After stints in journalism and education, David currently makes a living writing corporate communications, which are a kind of fiction without the art.

The Talk of the Town illustration is by Rob Barrett. Rob has been an artist and graphics designer for many years. He has worked as an artist and game designer for Sanctuary Woods Multimedia and Disney Interactive. Rob is now part owner in The Game Factory Comics and Games.

The third story is How the Blackout Really Happened, by Arnaldo Lopez Jr. (3117 words – Short Story)

How the Blackout Really Happened, illustration is by Stephanie Ann Johanson.

The fourth story is My Mother in the Market, by Sara Joan Berniker. (1159 words – Short Story) Sara has had fiction appear in Fusing Horizons, Mudrock, and Macabre, and one of her stories recently won Playboy's College Fiction Contest.

My Mother in the Market, illustration is by Stephanie Ann Johanson.

The fifth story is The Find at Tannon Thirteen, by Terry Bramlett. (5917 words – Short Story) Terry lives and writes in Brandon, Mississippi with his wife Brenda, who lovingly indulges his writing obsession. His sales include H.P Lovecraft's Magazine of Horror, Oceans of the Mind, and Horror Garage, and Neo-opsis issue #2. His stories range from Hard SF to Fantasy to traditional ghost stories.

The Find at Tannon Thirteen, illustration is by Stephanie Ann Johanson.

The sixth story is Tooth Fairies On-line, by Andy Oldfield. (5995 words – Short Story) Andy lives on the Celtic fringe of England in Cornwall. His fiction has appeared in the likes of Flashquake, HMS Beagle and Interzone. When not writing fiction he writes newspaper and magazine journalism. He would like to assure his wife and children that his relationship with the Queen of Faery is entirely platonic.

News this issue includes a list of the 2004 Hugo Award Winners, the winner of the John W. Campbell Award, and a list of the Prix Aurora Award finalists.