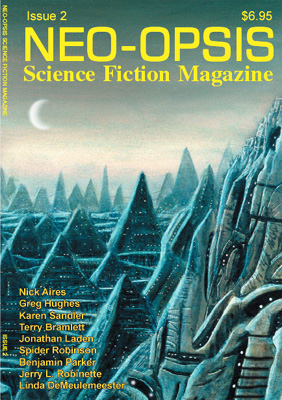 The cover, “Alien City” by artist Greg Hughes, is a wonderful painting of an almost organic looking city. Greg Hughes originally had training in graphic design, before drifting into fine art. Born in 1976, his interest in science fiction began from about the age of five. Although he had no idea what was going on, the imagery he saw on television made a lasting impression. On his thirteenth birthday he took up painting. As a teenager, his favourite SF authors included John Wyndham and John Christopher. Their work proved to be a strong influence, and helped inspire him to become an illustrator. Greg now studies animation.

Karl Johanson treats us to his amazing insight into the world around us with his editorial “I Approve of Sports Channels”. Everyone will enjoy his entertaining views on sports and science fiction.

Karen Kazanowski adds her cartoon flare to Karl Johanson’s editorial. She also introduces her latest cartoon characters Buzz ‘n’ Toffee, two guinea pigs with their own views of science and the world around them.

Fear not, Karl Johanson takes us for another Walk Through the Periodic Chart with Name That Isotope. You’ll laugh, you’ll cry… okay not cry, but you will enjoy another romp through the periodic chart and Karl’s wonderful photos.

Issue two’s first story is “Martingale Inequalities” by Karen Sandler (3,800 words – Short Story). Novelist Karen Sandler's romance fiction has been published internationally in countries as diverse as the UK, Denmark, The Netherlands, Australia and Estonia. Her books have appeared on bestseller lists and always garner favourable reviews from critics and fans. Her short fiction has appeared most recently in the horror anthology The Black Spiral and the upcoming science fiction and fantasy anthology Fantasy and Science Fiction. http://home.pacbell.net/sandler0/

The illustration for “Martingale Inequalities” and “The Worry Doctor” are by artist Benjamin Parker, who resides on Vancouver Island in BC, Canada. He is a visual artist who focuses on digital art, sketching, and inking. His art, spanning many genres, can currently be found online as well as in Neo-opsis Science Fiction Magazine.

“Write What You Know?” is a wonderfully witty poem by Nick Aires (100 words). Nick Aires is a contributing editor of Fantasy Readers Wanted – Apply Within. He is a recent Finalist in the L. Ron Hubbard Writers of the Future contest. He has published several dozen short stories in small press magazines, anthologies and ezines, including James Richey's Enchanted Realms anthologies.  He is currently working on several novels. http://www.silverlakepublishing.com/contribs/authors/aires.html

The third story, “The Smell of Dangerous Jasmine” is written by Terry Bramlett (5,800 words – Short Story). Terry Bramlett lives and writes in Brandon, Mississippi with his wife Brenda, who lovingly indulges his writing obsession. His sales include H.P Lovecraft's Magazine of Horror, Oceans of the Mind, and Horror Garage, and now Neo-Opsis. The stories range from Hard SF to Fantasy to traditional ghost stories.

Watch out! Karl Johanson gives us another “Maynard and The Cheese” cartoon. We won’t try to explain it here.

The forth story, “Seeing Connections” is written by Jonathan Laden (5,500 words – Short Story). Jonathan Laden is a 2003 graduate of Clarion Writer's Workshop and a freelance copyeditor. He has been published in "Chaos Theory: Tales Askew," "Hadrosaur Tales," and others. His website, which includes samples of his short work, is at jonathanladen.com. Jonathan lives in the Pacific Northwest with wife Michele Barasso and their family of dogs and cats.

Several science projects have been devoted to the study of simulated aspects of extra planetary colonies. “Shopping Mall 2: An Interplanetary Colony Simulation”, written by Karl Johanson, will take you on an amusing side trip from real science.

The fifth story, “Cel Blocked: A Victim’s Story, In His Own Words” is written by Jerry L. Robinette (1,500 words – Short Story). Jerry L. Robinette has been dabbling in the art of fiction for most of his 40+ years. Currently he lives in central Ohio with one wife and an assortment of cats. He works as a software designer for the Online Computer Library Center and consorts with a bunch of friends who have convinced him to try to get serious about his writing. This is his first professional sale.

C. J. Barna, John W. Herbert, and Paula Johanson supplied Neo-opsis with several book reviews for this issue. For the past ten years C. J. Barna has been ploughing his way through stacks of books, reading anything that crossed his path. John W. Herbert is a former co-editor of “Under the Ozone Hole” and sole editor of UTOH 2.0. Paula Johanson, writer extraordinaire, gives her usual insight into good reading choices.

Spider Robinson’s wonderful “Toastmaster Speech for the 2003 Hugo Awards” is recorded in this issue. If you didn’t make it to the 61st Science Fiction World Convention in Toronto in 2003, this is your chance to enjoy Spider’s speech, and you don’t have to sit way in the back just cause you’re late.

We come to the end of issue 2 with “The Last Two Pages, My Five Sense Worth” written by Karl Johanson. With his usual funny style, Karl delves into the science and pseudo-science of the five senses.