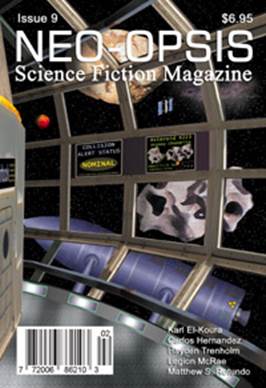 Karl Johanson designed and created the cover of issue nine, and two interior illustrations, to reflect his impression of Hayden Trenholm’s story Lumen Essence. Karl is proving to have quite a talent with digital imagery. He is an artist worth keeping an eye on.

Many of us have wondered how historians, contemporaries, and the media come up with these wonderful labels for the ages, like the copper age, the iron age, the industrial age and the space age. Karl Johanson gives us his usual out-of-the-blue-insight on what the present age should be called, with his editorial Succession to the Space Age. (Photo by Stephanie Ann Johanson, Space age diagram by Karl Johanson, Buzz ‘n’ Toffee related cartoon by Karen Lightbody)

Karl Johanson’s A Walk Through The Periodic Chart deals with Calcium this issue. Karl has included several of his photos to illustrate examples of calcium. More pictures of the thing in Karl Johanson’s article can be found at thing.

The first story in issue nine is Lumen Essence, by Hayden Trenholm. Hayden has written over 15 plays with productions across Alberta and on CBC radio. His short fiction has appeared in On Spec, TransVersions, Tesseracts 6, Neo-opsis Science Fiction Magazine, Challenging Destiny, and on CBC radio. His short story, The Luck of Willie Lumen that appeared in Neo-opsis #3 was nominated for an Aurora Award in 2005. In 1992 Anvil Press published his novel, A Circle of Birds. He lives in Ottawa, where he does research for the Senator for the Northwest Territories. (Illustrations by Karl Johanson. Emily Kazanowski as illustration model)

The second story is Cingulate Gyrus, by Carlos Hernandez. Carlos directs the First Year Experience Program and teaches in the English Department at Pace University in New York City. He has published in many genres, including poetry, theater, literary fiction and narrative nonfiction; his science fiction has appeared in places like Interzone magazine and The Amityville House of Pancakes, vol.2. His own Cingulate Gyrus is deeply in love with Liz, his partner of 11 years, and Calliope, his cat of 9. (Illustrations by Stephanie Ann Johanson)

The third story is The Kedari Virus, by Karl El-Koura. Karl is the author of more than forty published stories and articles. He lives in Greely, Ontario, Canada. He holds a second-degree black belt in karate, a yellow belt in jiu jitsu, and works for the Canadian Federal Public Service. (Illustration by Stephanie Ann Johanson)

The fourth story is Aces and Eights, by Matthew S. Rotundo. Matthew's work has also appeared in Paradox, Here & Now, Absolute Magnitude, and Phobos anthologies Hitting the Skids in Pixeltown and Absolutely Brilliant in Chrome.  He is a 1998 graduate of Odyssey.  He lives in Omaha, Nebraska, with his wife, Tracy. (Photo composite illustration by Stephanie Ann Johanson)

The fifth story is N0S 4A2, by Legion McRae. Legion has been dipping his toe in the writing pool off and on for twenty years. In that time he has published a number of articles for SF roleplaying and miniatures games. He has also partnered in one magazine and edited another. Legion has lived all over Canada, but currently resides in Vancouver, BC with his partner Elsie and their cat Sam. And yes - thanks to his parents - that is his real name