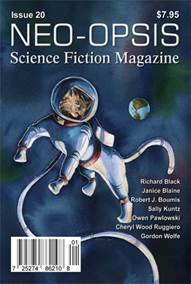 The cover of issue 20 is Cat in Space, by Janice Blaine. It has been said that one word can be worth a thousand pictures; that all creation begins with a single thought. It is within that idea that Janice’s work takes shape. Her paintings are interpretations of the stories all around us. Janice’s personal work is fuelled by a passion for storytelling and a love of nature. While my paintings may begin with a specific idea, they often take on lives of their own. They explore the universal language of myth and folklore.

Karl Johanson’s editorial for this issue is Science Flaws in Science Fiction. Karl talks about how science errors may be distracting, but how they don’t necessarily wreck a story.

This issue Karl Johanson’s A Walk Through the Periodic Chart is titled Antihydrogen, and if you want to know what that is, you have to look it up or read Karl’s article.

The first story in issue twenty is Epik (3,900 words), by Sally Kuntz. Sally lives in central Virginia with a husband and a pair of sighthounds. When she isn’t doing the finish carpentry on their house or writing she is a 15th Century gentlewoman in the Society for Creative Anachronism. (Story illustration by Stephanie Johanson)

The second story is iDA (4,387 words), by Robert J. Boumis. Robert was born in Creve Coeur, Missouri into a military family in 1986. He spent his childhood in Greece, and then his family settled in Arizona. He has worked in two biology labs, three pet shops, a bank, a salmon cannery in Alaska, and as a resident assistant. He is currently in the last year of his biology degree from Northern Arizona University. It’s his dream to make an indie military sci-fi thriller. (Story illustration by Karl Johanson)

The third story is A Deserving Master (5,482 words), by Richard Black. Richard is married and living the happily ever after in a small community near Toronto, except when it comes to the cold. Unfortunately wintering in the sunny south is not an option, so he spends the dark months hunkered inside, keeping warm and dreaming up short stories, such as his current offering, “A Deserving Master.” (Story illustration by Stephanie Johanson)

The fourth story is Botch’s Heretic (2,874 words), by Cheryl Wood Ruggiero. Cheryl writes in the elder mountains of south-western Virginia, USA. Her work has appeared in CALYX, South Carolina Review, The Potomac, Abyss & Apex, AnotheRealm, Crimewave, The Dawntreader, and Luna Station Quarterly, among others, and is forthcoming in Bewildering Stories, Cezanne’s Carrot, Mirror Dance, the Shelter of Daylight anthology, and in her poetry chapbook Old Woman at the Warm Spring (Finishing Line Press, February 2011). (Story illustration by Stephanie Johanson)

The fifth story is The Owners (2,926 words), by Gordon Wolfe. Gordon Wolfe died unexpectedly at 62. This short story was completed in January of 2010 during which time he was also working on his first novel. While Gordon was new to writing fiction, he was already a published author with numerous articles and books in physics and computing. Dr. Wolfe wrote five books and some thirty-eight technical articles on subjects as diverse as Solid-State Physics, Nuclear Structure, X-ray technology, Air and Water pollution measurement and transport, computer systems design and interfacing, genealogy, and illuminated historical manuscripts. He was a member of the Old-Time Fiddlers Association, The Bluegrass Association and the local Folklore Society. He was a member of nine performing groups over the years and has recorded both as a performer within a group and as a session musician. He approached writing fiction with the same enthusiasm he brought to every activity.

The sixth story is The Grandmother Tree (2,408 words), by Owen Pawlowski. Owen was born in southern Ontario in the summer. He enjoyed making up stories with his brother, and later learned to write them down. He currently lives in Toronto, studying English and Classical History. (Story illustration by Karl Johanson)