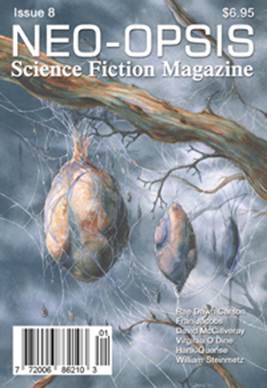 Artist Janice Blaine designed the cover of issue eight to reflect the story Love Among the Vacuum Spiders by David McGillveray. Janice tells stories through animation, illustration and design. Her training includes a classical animation certificate of recommendation from the Vancouver Film School and a diploma in Visual Arts, with distinction from ACAD. Janice Blaine has worked on a variety of projects ranging from layout and design for CD Roms and television, to a fully illustrated children’s book. What she loves most about her work is the endless creative challenges. Neo-opsis magazine is lucky to have Janice Blaine’s work on the cover of issue eight, and as an interior illustration.

Karl Johanson’s editorial this issue is Messing With Writers. It should almost have a warning label. Just place your tongue firmly in your cheek and you should be all right.

Letters to the Magazine this issue are from: Roy Lightbody, Angie Gignac, Casey Wolf (about both issue 6 and 7), Peter Halasz, Hope Hickli, Dax Harvey, E. B. Klassen, Linda DeMeulemeester (author of The Worry Doctor, issue two, and A Travelling Companion, issue five), Kim Schlieper, Lee Sheldon, and M. B. Edgett.

This issue, Karl Johanson’s A Walk Through The Periodic Chart deals with Aluminum. With the article is a related cartoon by Karen Lightbody (formerly Kazanowski).

The first story in issue eight is Love Among the Vacuum Spiders, by David McGillveray. David lives in Shepherd's Bush, London. He has been writing, principally in the area of speculative fiction, for a couple of years and has published works in a number of small presses including: Millennium Shift, Alien Skin and Quantum Muse. (Illustration and cover image by Janice Blaine)

The second story is Finely Tuned, by Virginia O’Dine. Virginia has her fingers in many pies, including recently launching the Okal Rel Universe Anthology, operating a web design business and managing a ski resort. She is honoured to be published in Neo-opsis, being a proud supporter of not only Canadian fiction, but of Karl and Stephanie as good peoples. Virginia has agreed to share her pie, along with her writing. (Illustration by Stephanie Ann Johanson)

The third story is Hell of a Salesman by Hank Quense. Assisted by his faithful mutt, Manny – Hank writes Science Fiction and Fantasy stories (along with an occasional writing article) from Bergenfield, NJ. All of these stories are humorous or satiric, because he refuses to write serious genre stories. He feels that folks who crave serious Fantasy and SF can get a full measure in any daily newspaper. In the spirit of disclosure, Hank reports that all of the story ideas (the good ones anyway) come from Manny. Hank merely translates the dog's ideas into a manuscript. Hank can be reached via e-mail at: hanque@verizon.net while Manny refuses to get an internet address until someone develops a paw-friendly keyboard. The pair of them have sold stories to Andromeda Spaceways, Here and Now, Cyberpulp, Fantastical Visions and several other anthologies. (Cartoon by Karen Lightbody)

The fourth story is Listen, by William Steinmetz. William is editor-In-Chief and Webmaster for StarCityGames.com and author of LAN Party: Hosting the Ultimate Fragfest, Paint Shop Pro 9 For Dummies and Wicked Cool PHP Tricks. (Illustration by Stephanie Ann Johanson)

The fifth story is Medyna’s Choice, by Fran Jacobs. Fran was born in 1977 in London. She graduated University in 2002 with a Masters in Ancient History and now lives in Edinburgh with her two cats, Megaera and Mr Kitty. She is an avid fantasy reader, as well as writer. Her favourite three writers are George R R Martin (who she think is the king of fantasy these days), Robin Hobb and David Gemmell. (Illustration by Stephanie Ann Johanson)

The sixth story is First Waltz, by Rae Dawn Carson. Rae lives in a tiny, antique house in the middle of a California orchard with a dog, two cats, and countless black widow spiders. Her background in sales and marketing uniquely qualifies her to write speculative fiction.

So often stories about time travel tell of important consequences for the world, the future and the past. Trivial Things to do With a Time Machine is an article written by Karl and Stephanie Johanson, with cartoons by Karen Lightbody, that will remind you that time travel could be used for less momentous results.

The Last Three Pages talks about V-con 30, and includes photos taken at the convention.