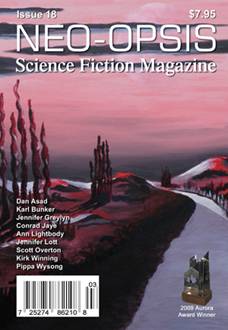 The cover, Alien Landscape, is an acrylic painting by Ann Lightbody. Ann was a former teacher who commonly lends her proofreading skills to Neo-opsis Science Fiction Magazine. Ann passed away in March of 2014. She and her talents will be missed.

Karl Johanson’s editorial for this issue is “Who is the Story About?” Karl talks about what makes a good science fiction story.

This issue Karl Johanson’s A Walk Through the Periodic Chart is titled “Hydrogen & Oxygen.” Can we split Hydrogen and Oxygen with radio waves, and what about the water on the moon? But that’s not all; Karl talks a bit about Copper, Zinc, Carbon, and Arsenic.

The first story in issue eighteen is “Breath and Tide” (1,123 words), by Jennifer Greylyn. Like many writers Jennifer has been telling stories for as long as she can remember and has only recently worked up the nerve to start publishing. Her work has appeared in such varied places as Abyss and Apex, Beneath Ceaseless Skies and Twisted Legends: Urbanized and Unauthorized and she has stories forthcoming in the anthologies Evolve and 2012 AD. She lives in Canada.

The second story is “Too Human” (3,036 words), by Kirk Winning. Kirk was born in Ontario and is a 59 year old retired chemical technologist, currently living on the Bruce Peninsula Lake Huron coast. From 1974 to 2006 he worked in Various Ontario based industries doing quality control, product development and process improvement. His days are filled with construction of his home, reading sci-fi and a little writing.

The third story is “Self” (1,166 words), by Conrad Jaye. Conrad possesses an uncanny aptitude to substitute his fantasies over reality as much as possible. As a youngster, he found it cheaper and less work to write a poem rather than buy a gift. A few birthdays later, the realization sunk in that maybe it wasn't so easy...and yet he still writes. Conrad works as a videographer when he's not avoiding reality.

The fourth story is “The Poet” (817 words), by Dan Asad. Dan is currently working towards a Psychology major at the University of British Columbia. The Poet is the first story of Dan's to be selected for publication. Though he remains a huge fan of science fiction, horror, and fantasy, the current state of the world has forced me to turn to writing works grounded (for the most part) in grim reality.

The fifth story is “Jerry” (4,200 words), by Karl Bunker. Currently a software engineer living in Boston, MA, Karl Bunker (Jerry) has been a jeweller, musical instrument maker, sculptor, mechanical technician, and a few other occupations he describes as "even less interesting." More information about Karl can be found at www.karlbunker.com.

The sixth story is “A Day in the Life” (1,296 words), by Jennifer Lott. Jennifer has had the writing bug for several years and swears never to recover. Currently a Vancouver college student, she studies by day, works by night, and tackles unfinished novels by weekend. She grew up in Prince George, where her passion for stories started as books, songs, and daydreams. Look for her next story in Okal Rel Anthology Opus 5, coming spring 2010 from Absolute XPress of Calgary.

The seventh story is “No Walls” (4,240 words), by Scott Overton. Scott is a career radio morning man in Sudbury, Ontario now enjoying the life of a freelance writer, and learning that normal people don't wake up at 4:00 am. He has a number of short stories awaiting publication, a science fiction thriller novel in revision, and a new SF adventure novel in progress.

The eighth story is “A Trip to the Northern Elves” (6,582 words), by Pippa Wysong. Pippa is a medical, science and children's journalist. She is widely published in newspapers, magazines, and websites in Canada and the US - both news and features. She wrote the 'Ask Pippa' Q&A science column on the Toronto Star's kids' page from 1988-2008 (www.AskPippa.ca).

On The Last Four Pages we have “Team Creativity” where Karl Johanson tells us about being hired by Sanctuary Woods Multimedia and his involvement with computer game production.