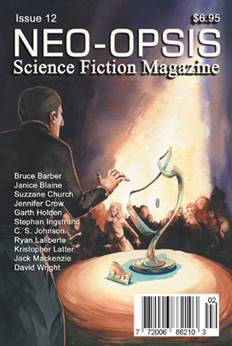 Janice Blaine designed the cover of issue twelve to reflect the story The Value of Paper Clips by Stephan Ingstrand. Janice has a talent for being able to tell stories with her animation, painting, illustration and design. Her training includes a classical animation certificate of recommendation from the Vancouver Film School and a diploma in Visual Arts, with distinction, from ACAD. Neo-opsis received many positive responses to Janice’s cover and interior illustration from issue eight. We are very glad that she was able to do four illustrations and the cover for issue twelve.

Karl Johanson’s editorial this issue is Perceptions and Cryptozoology. We all get a little more information about the way editor Karl Johanson thinks. With the editorial is a related cartoon by Karen Lightbody (formerly Kazanowski).

This issue, Karl Johanson’s A Walk Through The Periodic Chart deals with Carbon. With the article is the image of a pencil sketch by Stephanie Johanson.

The first story in issue twelve is The Value of Paper Clips, by Stefan Ingstrand. (Illustration by Janice Blaine) Stefan is an archivist. His work has previously been published in the Swedish magazine Saga, and the US anthology ShadowSword #4 (Coyote Moon Publications).

The second story is In Search of a Loop Hole, by C. S. Johnson. (Illustration by Janice Blaine) C. S. Johnson is a 29 year old, mother of two. She was born and raised in East Tennessee, and grew up with campfires, ghost stories, and a steady diet of Twilight Zone and Stephen King. Though her genre focus may vary, ranging from Sci Fi to Horror to fantasy, she’ll always be a sucker for ANY good fictional tale.

The third story is The Lost Generation, by David Wright. (Illustration by Janice Blaine) David is a high school English and Social Studies teacher at British Columbia Christian Academy in Port Coquitlam, Canada. He has been teaching for ten years in the liberal arts field. He is also active in his church, teaching Sunday school, leading singing and occasionally preaching. David is married with two daughters. His writing credits include stories, poems or articles in the following periodicals: Humor for a Teacher’s Heart, Antipodean SF, Alien Skin Magazine, Anotherealm, Christian Info, Vancouver Echo, New Shoots and The Hospital Employees Union Magazine.

The fourth story is Fuzzy Green Monster Number Two, by Suzanne Church. (Illustration by Janice Blaine) Susan has been published in Oceans of the Mind, Neo-opsis issue 5 (The Wind and the Sky), Shadowed Realms, Northwest Passages: A Cascadian Anthology, ChimeraWorld #2 and Challenging Destiny.

This issue we have a wonderful poem, Words Like Sails, by Jennifer Crow. (Illustration by Karl Johanson) Jennifer’s poetry has appeared in a number of genre venues, including Strange Horizons, Star*Line, and Talebones. One of her poems received a Rhysling nomination this year, and others have garnered honorable mentions in past issues of the Year’s Best Fantasy and Horror anthologies.

The fifth story is Profit Margin, by Kristopher Latter. (Illustration by Stephanie Johanson) Kristopher started writing stories the moment that he thoughthe could do better than what he was reading at the time. Twenty years later, and he has yet to be satisfied that any story he has written is perfect. He continues toward this impossible goal while studying at an Ontario college for a job that will someday make chasing this dream financially feasable.

The sixth story is Here There Be Dragons… by Jack Mackenzie. (Illustration by Stephanie Johanson) Jack has had short stories published in several anthologies as well as in multiple issues of Rage Machine Magazine.

The seventh story is Mediclone, by Garth Holden. (Illustration by Stephanie Johanson) Garth is a member of the Victoria Writer’s Society. He was a finalist in the Writers’ Circle of Durham Region 2006 short Prose contest.

The eighth story is Expensive Things, by Ryan Laliberte. (Illustration by Stephanie Johanson) Ryan lives in Ontario and travels compulsively. He is currently finishing a History degree at the University of Toronto.

The ninth story is Collaboration, by Bruce Barber. Bruce is the co-author (as Bevan Amberhill) of two mystery novels, The Bloody Man and The Running Girl. Other short fiction and articles have appeared in various publications in Canada, including On Spec, Descant, StoryTeller, and The New Quarterly. He is also a freelance editor, has worked as an interviewer for the Shakespearean Festival in his hometown of Stratford, Ontario, and as an editor of publishing assistant with The Pasdeloup Press, The Mercury Press and Canadian Fiction Magazine.

SF News includes a list of the Hugo Award Nominees, the Starburst Award Finalists, a tribute to Kurt Vonnegut Jr., and a tribute to Donald Jeffry Herbert best know as Mr. Wizard.

Science News mentions the discovery of two planets in other star systems. One appears to have an atmosphere, and the other seems to be in an orbital position that should produce temperatures that would allow for liquid water. It also appears that there is more to the Milkway Galaxy than we previously assumed.

Karl Johanson tells us about a Guy Gavriel Kay book reading at Bolen Books in Victoria, BC.

Karl Johanson devotes The Last Three Pages to Capturing a Feeling with Music. Karl attempts to express what types of music give him a feeling of science fiction.