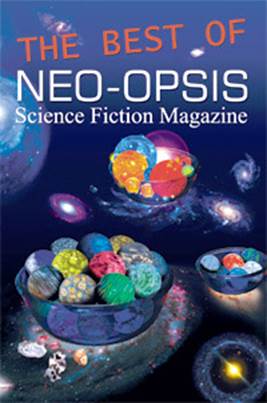 The Best of Neo-opsis Science Fiction Magazine is an 8” by 5 ½”, 80 page perfect bound anthology.

The cover of issue 28 is Bowls Full of Plants, Moons and Stars, by Karl Johanson.

The Foreword is by Karl Johanson who discusses some of the elements of a good science fiction story.

The first story is “All the Tea in China,” by Yvonne Pronovost. (3,953 words – Short Story) Yvonne lives in Edmonton, Canada, and enjoys traveling to places that are as unlike Edmonton as she can find. She also enjoys digging in the dirt, and skeletons. She is finishing up a B.A. in Anthropology (Archaeology) and has a short story appearing in Darkness Rising 2005.

The second story is “Virtually Yours” by Nina Munteanu, (3458 words – Short Story). Nina is an internationally published author, whose fiction and non-fiction has appeared in publications throughout United States, Canada, the UK, and Romania since the 1980s. Publications include, among others, Bram Stoker award-winning Chiaroscuro, GateWay SF, Hadrosaur Tales, and Dreams & Visions. Her short story, "Angel's Promises", was nominated for the Speculative Literature Foundation (SLF) Fountain Award in 2004. She is a member of SF Canada and also serves as assistant chief editor of Imagikon, Romania's only totally English webzine. Nina is a scientist with an environmental consulting firm in Vancouver, B.C., and regularly speaks at conferences and publishes papers on the environment.

The third story is “Staphmeyer’s Mantra” by Hank Quense. Assisted by his faithful mutt, Manny – Hank writes Science Fiction and Fantasy stories (along with an occasional writing article) from Bergenfield, NJ. All of these stories are humorous or satiric, because he refuses to write serious genre stories. He feels that folks who crave serious Fantasy and SF can get a full measure in any daily newspaper. In the spirit of disclosure, Hank reports that all of the story ideas (the good ones anyway) come from Manny. Hank merely translates the dog's ideas into a manuscript. Hank can be reached via e-mail at: hanque@verizon.net while Manny refuses to get an internet address until someone develops a paw-friendly keyboard. The pair of them have sold stories to Andromeda Spaceways, Here and Now, Cyberpulp, Fantastical Visions, and several other anthologies.

The fourth story is “The Wind and the Sky” by Suzanne Church. Susan has been published in Oceans of the Mind, Neo-opsis issue 12 (“Fuzzy Green Monster Number Two”), Shadowed Realms, Northwest Passages: A Cascadian Anthology, ChimeraWorld #2 and Challenging Destiny.

The fifth story is “Survival Strategies,” by Vaughan Stanger. (4,750 words – Short Story) Vaughan is a project manager working for an engineering company based in Chelmsford, UK. His stories have been published in Interzone, 3SF and Stillwaters Journal, with others scheduled to appear in Postscripts, Scheherazade, and the Croatian SF magazine Futura.

The sixth story is “A Song for Morning,” by Hayden Trenholm. (3449 words – Short Story) Hayden is both a playwright and a prose writer. In the past ten years, he has written over 15 plays with productions across Alberta, in Ottawa and on CBC radio. His short fiction has appeared in On Spec, TransVersions, Tesseracts 6, Neo-opsis, Challenging Destiny and on CBC radio. In 1992, Anvil Press published his novel, A Circle of Birds. He lives in Ottawa where he does research for the Senator for the NWT. Hayden runs Bundoran Press.

The seventh story is “The Smell of Dangerous Jasmine” by Terry Bramlett (5,800 words – Short Story). Terry Bramlett lives and writes in Brandon, Mississippi with his wife Brenda, who lovingly indulges his writing obsession. His sales include H.P Lovecraft's Magazine of Horror, Oceans of the Mind, Horror Garage, and Neo-opsis. The stories range from Hard SF to Fantasy to traditional ghost stories.

The eighth story is by “Heaven Flower” C. L. Russo. (1,465 words – Short Story) C. L. Russo is a social worker in Baltimore, Maryland and lives in Pennsylvania with his wife and two daughters. He is an admitted speculative fiction addict, whose drugs of choice are Gene Wolfe, Jeff Vandermeer, and all types of short fiction. He is not interested in kicking the habit. His work has appeared in the October 2004 edition of the Twilight Times ezine.

The ninth story is “Stars Cry Too” by Jim Gurley. Jim is a fifty-two year old retired chef living in the deserts of Arizona with his wife and two cats. Jim has had stories published by Simulacrum, Red Scream, Dawnsky, Nocturnal Ooze, Alien Skin, Aiofe’s Kiss, and several others.

The tenth story is “The Silver Connection,” by Frank C. Gunderloy Jr. (10,040 words – Novelette) Frank is a retired rocket scientist who makes his home in Palm Desert, California. His work has appeared in Amazing, Realms of Fantasy, Absolute Magnitude, and in the anthologies More Amazing Stories (Tor Books) and Leaps of Faith (Francis Isadore Electronic Press). He has also published numerous technical articles, reports, and patents in the fields of rocket propellants, inorganic chemistry, and environmental sciences. He is an active member of the Science Fiction and Fantasy Writers of America and of the Original Palm Springs Writers Guild. Other activities include trail patrol as a volunteer in the Mt. San Jacinto State Wilderness. A detailed list of his credits can be found on his web site at www.mojavesden.com

The Best of Neo-opsis Science Fiction Magazine was published by Bundoran Press.

Click here to get your copy of The Best of Neo-opsis Science Fiction Magazine!