December 26, 2004 – Neo-opsis editor, Karl Johanson, will be on CJSW radio* on Monday December 27, from 10:00 AM to 11:00 AM PST. The panel "Putting the Science in SF" took place at Conversion 21 in Calgary Alberta in August of 2004, and was recorded by CJSW radio. Also participating on the panel was, lawyer and science fiction fan Blair Petterson, Science teacher Chris Vickers and Science Fiction writer for the Okal Rel universe Lynda Williams. (*Calgary area 90.9 FM or via the web at http://www.cjsw.com) 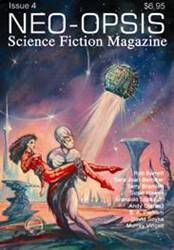 August 11, 2004 – Artist Stephanie Ann Johanson has entered her painting “Cave” in The 2004 International Art Contest online. “Cave” can be found in the Realism section of the contest, entry #165. Voting is open to the public, so please click on the contest link and have a look at the artwork.

July 30, 2004 – Editor Karl Johanson will be speaking at the science fiction convention Con-Version XXI. Con-Version XXI is held in Calgary, August 6th to 8th, 2004. Other guests at the convention include: George R. R. Martin, Spider and Jeanne Robinson, James Beveridge and The Arrogant Worms. 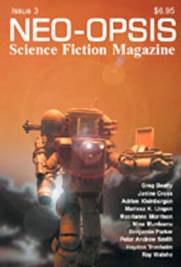 July 8, 2004 – Issue 3 of Neo-opsis Science Fiction Magazine is now in print! We apologize for the delay.

June 7, 2004 – We have worked out a special deal with On Spec magazine. For a limited time you can now buy a combination one-year subscription, getting both ‘On Spec the Canadian magazine of the fantastic’ and ‘Neo-opsis Science Fiction Magazine’ at 25% off the usual rate for both. 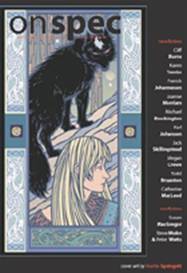 May 12, 2004 – The Game Factory, Comics & Games at 754b Goldstream Ave. Langford, BC V9b 2X3, (250) 474-2005, is now carrying Neo-opsis Science Fiction Magazine. The Game Factory is owned and operated by three fun guys who love games, Brent, Darren, and Rob. If you enjoy comics and games, you should check out The Game Factory.

April 8 –11, 2004 – Karl and Stephanie Johanson attended and participated in the programming at the science fiction convention Norwescon 27, held at the Double Tree Seattle Airport Hotel.

February 27, 2004 – Neo-opsis editor Karl Johanson was to be interviewed by talk show host Joe Easingwood on C-FAX 1070 radio, but the interview was postponed for a later date. The station can be heard online at http://www.cfax1070.com/

February 20, 2004 – If you were an attending or supporting member of Torcon 3 (the 2003 World Science Fiction Convention), or if by January 31, 2004 you had an attending or supporting membership for Noreascon 4 (the 2004 World Science Fiction Convention); you are eligible to nominate for the 2004 Hugo Awards and the John W. Campbell Award. Nominations must be in before March 25th, 2004. 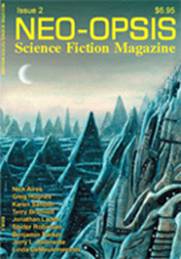 February 2004 – Rich Horton reviewed Issue one of Neo-opsis Science Fiction Magazine in the February 2004 issue of Locus. (Information on Locus is available at http://www.locusmag.com/) "I was quite pleased to see a new magazine from Canada, Neo-Opsis. The first issue features five good science fiction stories - overall quality was frankly well above what I expect from new ventures like this. Perhaps the best story is "Timestealer", by Steve Stanton, about a man who records short experiences from other people, at the cost of their memory of the experience, and his search for truly novel material. Also notable were a couple of novelettes: Sherry D. Ramsey's "On the Road with Fiamong's Rule", an amusing story of an alien visitor; and Darryl Murphy's "Island of the Moon", a sad story of another alien visitor, a witness to Earth's ecological catastrophe."

October 15, 2003 – The first issue has been mailed out to subscribers

October 10 to 12, 2003 – Neo-opsis Science Fiction Magazine ran a dealers table all three days of Vcon 28. Vcon is a Vancouver based science fiction convention, that this year was held at The Days Hotel, 9850 King George Highway Surrey, British Columbia. We threw a root beer launch party for the Neo-opsis Science Fiction Magazine #1, on the evening of October 11th, in the honeymoon suite. It was a good time for all.

October 10, 2003 – We picked up the first print run of Neo-opsis Science Fiction Magazine, issue one, from Hemlock Printers Ltd. and were given a wonderful tour of the printing plant.

October 1, 2003 – Issue one has been proofed for print. We should be sending out the first issue as soon as we get them from the printer.

September 2003 - The first issue of Neo-opsis Science Fiction Magazine will be going to print.

September 2003 – We have been experiencing some online difficulties, due to our server host updating their software.

If you have had trouble connecting or using the online store, please try again at a later date.

July 30, 2003 – We now accept PayPal for online purchases. Check out the STORE 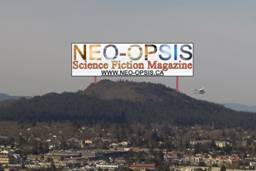