By Gregory Benford and Larry Niven 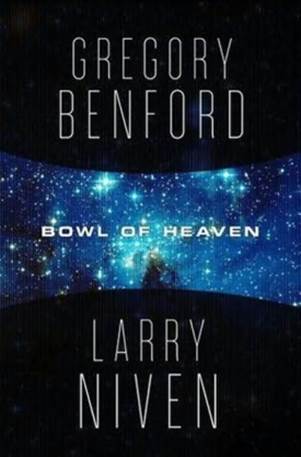 Human interstellar travelers are headed for a habitable planet they’ve named Glory. En route they come across a gigantic half sphere around a red dwarf star. Magnetic fields in the hemisphere direct a jet of matter from the star, propelling the star and the inhabited hemisphere through space, towards Glory’s solar system.

Enigmatic aliens who live in the half sphere, capture some of the human who’ve decided to explore the titanic structure. An unusual part of the various alien species on the bowl is that they are far more in touch with what we’d call the sub-conscious mind than humans. Some of the humans escape and explore a tiny part of the huge structure (it would take thousands of life times to examine a large part of the structure).

The story is great with the ideas, and environments, and aliens, and history, but not as full of memorable characters as the Ringworld series.

The story ends rather precipitously, without any parts of the sub-plots feeling resolved to any extent. Stories intending a sequel are just fine (great sometimes), and while I’m interested in checking out the next book, it didn’t feel like the novel had finished in any way when I got to the last page. It felt more like I’d read half a long novel than read a whole novel in a series.

The story Bowl of Heaven shouldn’t be confused with the raw food restaurant chain of the same name.

Larry Niven, at the Canadian Publishers’ party at Worldcon 2009 in Montreal