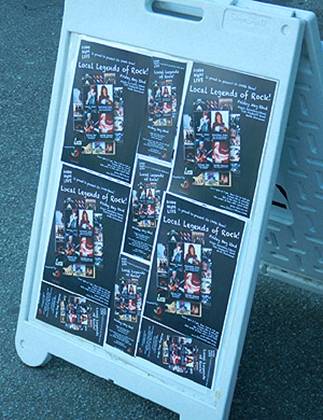 I got the 2:00 PM ferry from Victoria over to the mainland. I’d forgotten how busy rush hour traffic is in Greater Vancouver, so by time I checking into my hotel I realized I didn’t have enough time to grab some dinner before the concert. So I expected to be hungry throughout the concert. Fortunately the people running the concert provided free pizza, brownies, strawberries, popcorn and other assorted items. So, a concert and free pizza… not too bad a day.

I came to the concert as a fan of Prism. I’ve seen a few versions in concert. Al Harlow (lead guitar and lead vocals) in concert with Steve-O (keyboard, guitar and vocals), Timothy B Hewitt (bass and vocals) and Gary Grace (drums and vocals). I’ve seen later concerts with the current group of Al Harlow, Gary Grace, Tad Goddard (bass, vocals), and Marc Gladstone (keyboard, vocals). Needless to say, couldn’t turn down the opportunity to see a concert in North Vancouver with 4 of the Prism members from the 70’s.

The concert was Friday Night Live’s 100th concert. Before the first song of the night, Al Harlow said, “Here’s a disclaimer; this isn’t the reunion of any one band, but it might be the reunion of 3 or 4 bands.”

Local Legends of Rock line up:

The “Local Legends of Rock” “Friday Night Live” concert had a high school dance feel to it, as the concert was in a high school gym. 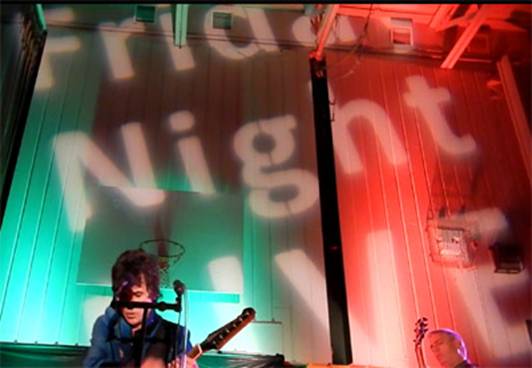 They started off with “Honey Hush (Hi Ho Silver)” (written by Big Joe Turner). Al Harlow, who sang lead on this, said, “Here’s something we grew up on, this was before we realized there was more money in writing your own songs.” While listening to this upbeat 12-bar blues song, I was reminded of the line from Prism’s song “American Music.” “Whenever I’m feelin’ down, there’s only one thing pullin’ me through. 12 bar shuffle and a megawatt stereo.” Fans of Prism’s song “Crime Wave” might recognize a similarity in the intro riff for it and “Honey Hush (Hi Ho Silver).” (I thought the song had something of a Prism sound in the intro, but I didn’t note the “Crime Wave” connection until it was pointed out to me after the concert.) Rocket’s Bass drum peddle slid away from him during the song. Ab noticed and was good enough to push it back in place. Later in the concert they taped the peddle down, then used some rope to attach it to his chair.

“Young and Restless” is a Prism song from the album of the same name. To introduce the song Al sometimes says, “Long ago on daytime television, there was nothing on but soap operas. Remember that? One of them was called, The Young and the Restless. It was so boring Lyndsey and I had to write a song about it.”

“Nickels and Dimes” (by Al Harlow and Lindsey Mitchell) is a mainstay of Prism concerts. Al talked about trying to convince Rod Stewart to put this song on his next album, before getting it recorded by Prism. Stewart referred to the song as ‘…not a little mandolin Maggie May type thing, but a really dirty, nasty rock song.’ Al also mentioned getting a cardboard box in the mail, with several more boxes inside, like nested dolls. Inside the smallest box was a 3” tape, with a suggested bridge for the song by Lyndsay Mitchell (Prism, Seeds of Time, William Tell & the Marksmen, Sunshyne), which is included in the song. I expect collaborating on a song from a distance is much easier now, with the technology to send digital copies of songs and song portions over the internet, instead of sending analog tape by mail in nested doll boxes: ) Along with “Take Me to the Kaptin” “Nickels and Dimes) is one of the Prism songs that often inspires at least one audience member to yell out the Saturday Night Live skit line, “More cow bell!” I didn’t hear it at this concert though: ) 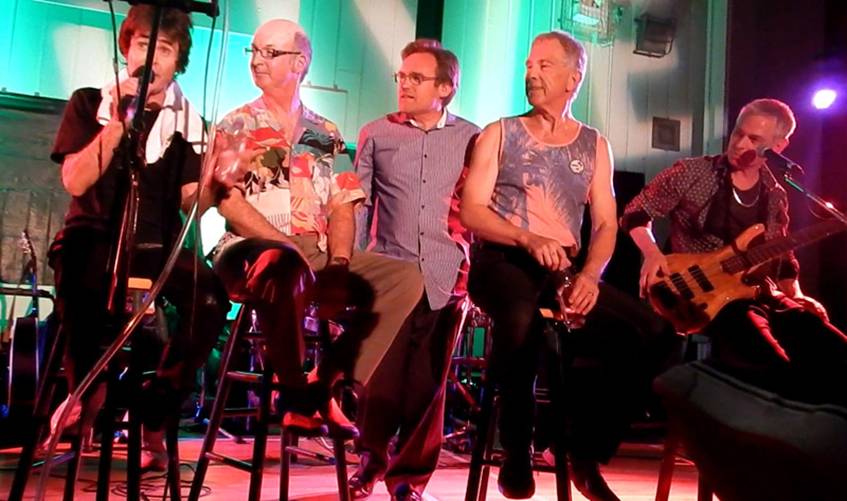 During the mid-conference interview they were asked ‘How does it feel to be back together doing this?’ Ab said, “It feels great, after doing a few songs. It was a little scary to start.”

Rocket told the interviewer, “You’ll really have to speak up! I can’t hear… and it’s all his fault.” (*Points at Al*) “I’ve been playing with Al Harowitz since about 1967… so I can’t hear a thing.”

The interviewer said to John, “You’ve been hanging around these guys forever.” He replied, “Yeah, we went to different schools together.”

In reference to wild times with the band, John said, “we got run out of a few venues.” Then Rocket said, “There’s a half a dozen… well maybe a dozen or a few dozen cities that we’re not welcome in any more. … In fact we can’t really leave Burnaby.”

Al mentioned that Ab is younger than the rest of the guys. He said, “when we first started playing in a top 40 band with Ab, the band was called Jet. And we’d rehearse at Ab’s mother’s house, in the basement, and Ab’s mother would come down and give us milk and cookies during the rehearsals.”

I wished the piano was a bit louder for “Kaptin” while hearing it live. Listening to a video afterwards I realized that my camcorder picked up the piano better than my ears did. In contrast Rocket’s drumming sounded much better live than the slightly muted reproduction on the recording.

Al Harlow told me after the concert, “True confession-time: I had my guitar Talk-Box all set up, and was scheduled to do a segment to lead into "Kaptin" ... I simply forgot to do that segment!” Al usually uses the talk box for the Prism song, “Mirror Man,” (written by John Hall and Lindsey Mitchell). (Here’s a video of Prism performing “Mirror Man” in Vancouver in 2012: https://www.youtube.com/watch?v=25Mz2m0KhJk)

They played a purely instrumental version of “You’re Like the Wind” (written by Jim Vallance, credited as Rodney Higgs). I had a brief thought that that was a good choice, as the vocals for the song work best with well-tuned harmony among the singers, and the performers didn’t have much time before the concert to rehearse together. Then I realized it just turned out to be a beautiful way to present the song. While they weren’t singing the lyrics, I’m sure much of the audience (and possibly the performers as well) heard Ron Tabak singing them for part of the song. Rocket traded his drum set for an acoustic guitar for this song. John hall started playing the ‘vocal’ part of the song on the keyboard. In the second verse Al played the ‘vocal’ section on slide guitar. 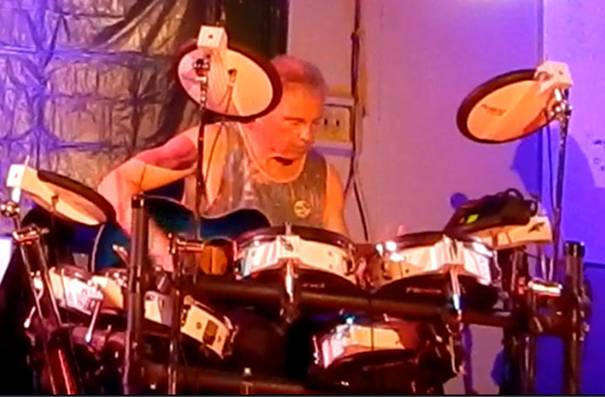 Three of the performers at the concert were among those who recorded the original released version of “You’re Like the Wind,” which included: Ron Tabak: lead vocals, Lindsay Mitchell: acoustic 12-string guitar, Al Harlow: slide guitar, Ab Bryant: bass, Rocket Norton: drums, Tony Nickels: oboe. If they every pull together a similar concert and decide to do an instrumental of “You’re Like the Wind” again, I’d love to hear it with an oboe included.

The song “My Home Town” (by Geoff Eddington) was Seeds of Time’s first single release. In 1971 “My Home Town reached #76 in RPM Magazine’s Canadian top 100.

The keyboard for what may be Prism’s best known song “Spaceship Superstar” (written by Jim Vallance) is usually a 70’s style polyphonic synthesizer. I’ve heard the original, done by Peter Bjerring using his Arp Odyssey synthesizer. I’ve heard Steve-O play note perfect versions of Peter’s solo during concerts, with a modern keyboard set to sound like an Arp. I’ve heard Marc Gladstone play the solo, paying respects to Peter’s version, but adding his own variations on the theme. At this concert, John had his keyboard set for standard piano. It sounded great for the intro (where John had a big smile) and it sounded amazing for the solo (John improvised in places while playing much of the original version of the solo). 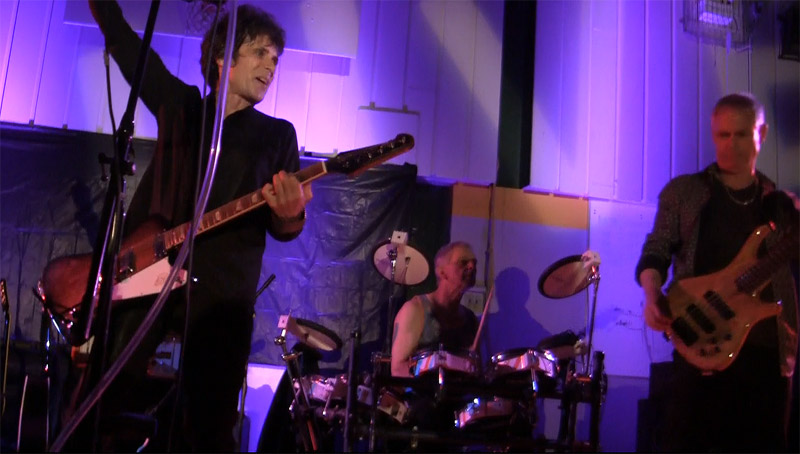 John sang lead on “Little Joe from Chicago” (written by Mary Lou Williams and Henry Wells in 1930). John’s microphone was set a bit low which was disappointing, but otherwise it was some great R&B. This is another song Seeds of Time used to play. As Seeds of Time most of the band members would do a chorus line and do synchronized dance steps and kicks, while John Hall did a solo on the piano. They didn’t include the dance routine at this concert though.

“Supergirl” was another Seeds of Time song from around 1970, about Al’s girlfriend at the time.

While I could point out a few technical quibbles, such as the back-up answer lines in “Spaceship Superstar” coming a bit early* (not bad for the first concert together in decades), the concert was amazing. They had the audience’s ears glued to the stage. (Okay, that’s not the best metaphor I’ve ever come up with.) It was also quite obvious the guys enjoyed performing together again.

I’m at the top of all the charts on Mars.

The concert was a great time, with a fun variety of music and musical styles, and a bit of history I’m very glad I didn’t miss. 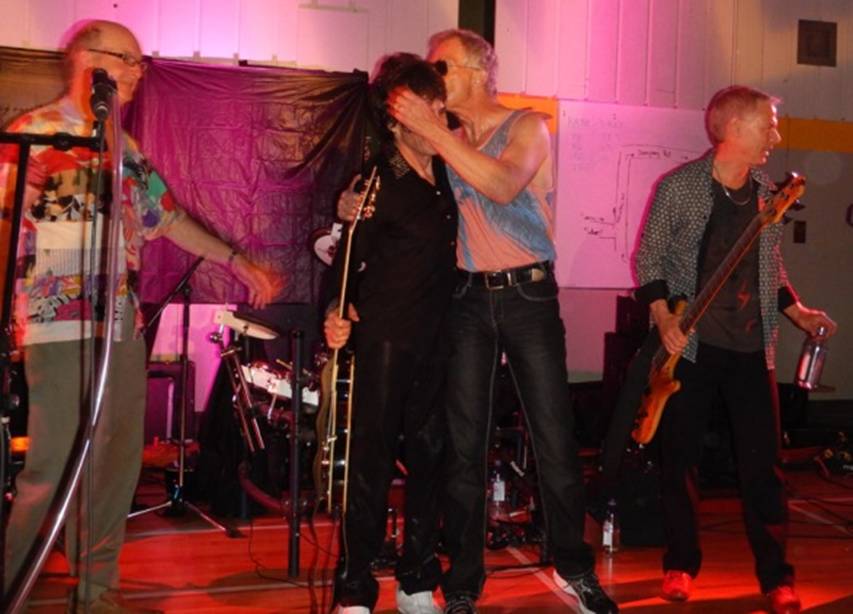 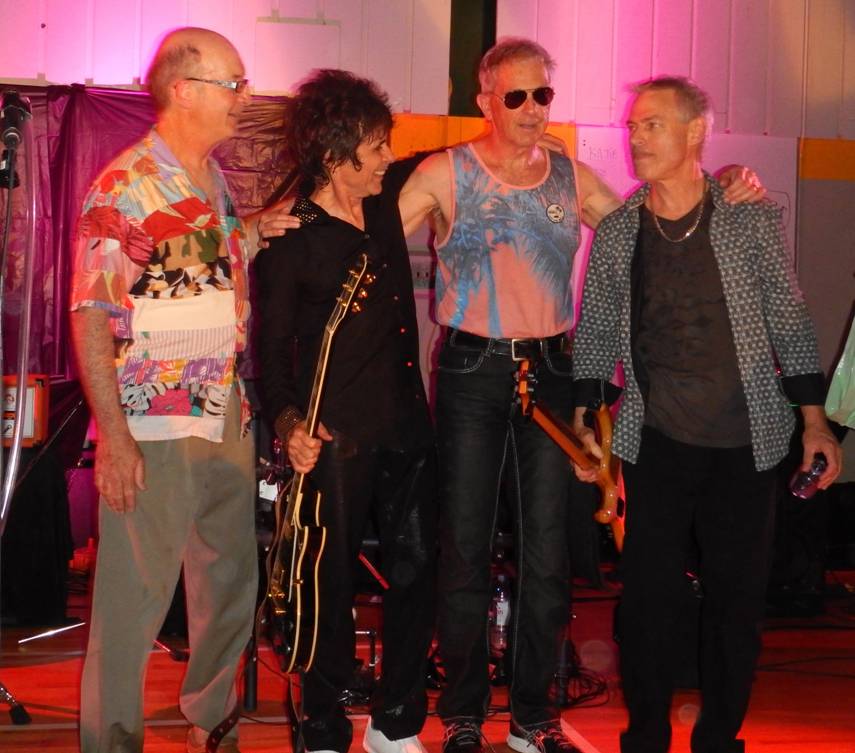 Review by Karl Johanson (Ethical disclosure: Karl Johanson is friends with Al Harlow, but he was a fan of Prism for roughly 30 years before meeting him.)